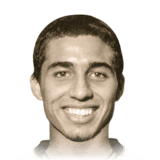 I don't know what it is about Icon cards but they always seem to play to an ability that's way above their stats and Trezeguet is no exception here. I loved his 89 Card last year so I figured I would give this card a try and he's not disappointing.

Pace wise he isn't the quickest but at the same time he's far from slow. He's got more pace than your average targetman style striker which is a big plus and I like the fact that his sprint speed and acceleration are on a par with each other rather than being inbalanced one way or the other. I feel like a Chemistry that increases pace like I used helps him tremendously

Shooting wise. My God does Trezeguet know how to shoot. Any chance he received in the box was almost guaranteed to rocket the back of the net. 90 finishing combined with 89 shot power is absolutely monstrous and any goalkeeper in the game would struggle to prevent him from scoring. His positional aware is great at 86 and was enhanced even further when you combined it with his good workrates.

Trezeguets Passing is very much extremely average when it comes to a striker. His short passing is adequate enough and being a striker you don't really have to worry about his long passing.

4* 4* is a great combination for any player to have as it allows them to be dynamic in both their shot selection and their movement across the pitch.

Dribbling wise is far from Trezeguets strong point. Being 6'2 and having low agility and balance can mean he sometimes feels a little bit clunky both on and off the ball. His dribbling is average but his ball control is excellent and so are his reactions. Trezeguet seems great at reading the game.

Physical wise Trezeguet is quite strong when you combine his Strength and his height especially with a Hawk Chemistry style to boost his strength and jumping, Trezeguet also possesses an aerial threat from crosses and corners

Trezeguets Pros are: His Finishing. His Shot Power, His 4* weakfoot 4* skill move combination, His strength and his positioning and his cons are: His agility and his balance.

Overall i'd give Trezeguet a rating of 9 out of 10 as for this stage of the game he feels excellent. He's very much a poacher type striker but he's incredible at what he's intended to be used for.

Value for coins I would give him a 7.5 out of 10 as I can appreciate most people don't have 300k lying around right now to be able to purchase him. When you are in a situation you can though I highly recommend him