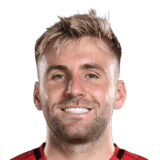 Bought him right at the beginning of this Fifa as he looked very solid for my BPL team. Stuck a shadow on him and he turned into an animal. He feels so quick on the ball and can beat players easy. Also feels really quick when tracking back fast players.

Due to his height and build he also feels really strong on the ball and can easily out muscle most attackers and his good dribbling and allows you to quickly turn and get the counter attack going.

His defending is so good with a Shadow, he is honestly so hard to get round and he always gets a foot in or out muscles the player.

I packed Robertson from rewards last week and thought i'd give him a ago as I always wanted to but didn't feel I needed to spend the 50k. Although Robbo is a very good left back and does feel quicker than Shaw I would probably say i still prefer Shaw. He just feels much stronger and I have more confidence he wont get shrugged off the ball when trying to play out.

Overall for me he is the best LB in the prem, I've tried IF Digne, Mendy and as mentioned Robbo but still Shaw had the edge so if you are wondering if you splash the extra bit of coins on Robbo I would say give Shaw a go for a couple games and i reckon you wont wanna get rid of him.

Pretty much every section. Not a single area i think was terrible. Maybe a loose pass here and there but that could happen with KDB so no problems there.

Cant think of one. Maybe without a shadow he could be a bit slow but use a shadow and your'e gucci. If you cant get a Shadow im sure an Anchor would have similar affect.