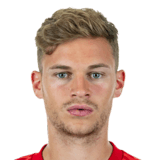 So when you're looking for a good RB you'll want a player with all around good stats, they don't need to be great but sufficient to fulfill their role. Kimmich has some great stats and the best overall in the game for a gold rare RB so with the coins I had to spare I decided to give him a try instead of the Klostermann I was using. Everything about his card is good or great, except his pace. Now I'll sound like someone who only cares about pace but I don't, other positions such as CB, central midfielders or ST's can get away with have lower pace around 68-79 but for a RB it felt off. I'll try to explain it better.

Pace (3/10): I play mainly SBC on legendary and rivals on FUT and for SBC's I've never had a problem with him since you're playing against the AI which can sometimes be a bit dumb, but playing with him on rivals was a totally different perspective. You'll mainly play against players with very pacy wingers and Kimmich just can't keep up with them, even having him staying back while attacking isn't enough to justify the 72 pace he has. I personally don't think he's reliable for Rivals due to this fact alone, players like Pépé, Rashford, Gnabry, Coman and so on will just gobble him up and get right past him with pace alone.

Shooting (5/10): He's a RB, you won't rely on shooting to be honest but the 1 goal I scored with him felt like his shooting is decent and nothing more.

Passing (8/10): His best stat, and honestly he can pass the ball very well. Good with crosses and through balls, it was for me his best quality.

Dribbling (6/10): I'm not a big dribbler but he was decent enough for roll-backs and simple 3 star dribbles.

Defending (7/10): Not awesome and not bad, it felt good at best since he can take the ball of his opponents with tackles on 1v1 if they didn't fly past him.

Physicality (5/10): Can win some balls with strength but tougher players like Harry Kane will always strive against Kimmich, even players like Gomez and Insigne beat him on strength alone sometimes when fighting for a ball.

Pace, for me it's too low for a RB. If it was 77 or above he would've been a lot better