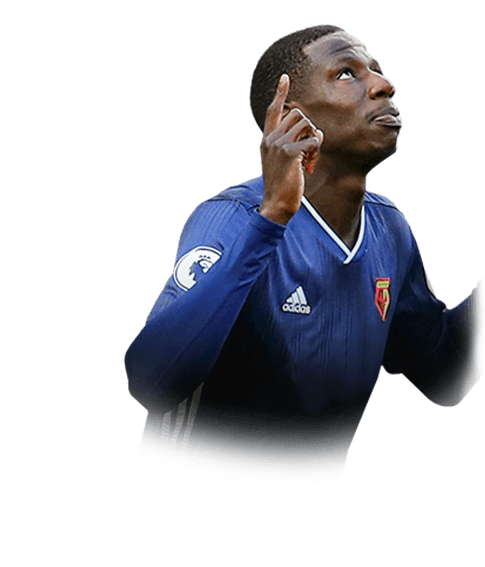 Abdoulaye Doucouré's Inform card is rated 84, he is 184cm | 6'0" tall, right-footed France midfielder (CM) that plays for Watford in Premier League with High/Med work rates. His average user review rating is 4.5 out of 5 . He has 3-star weak foot and 3-star skill moves, He does have a real face in-game. Abdoulaye Doucouré has 2 special cards with ratings between 81 and 86. He was born on 01-01-1993 and he is now 29 years old.

His real-life stats are currently 0 goals and 0 assists in 3 matches in domestic competition. He also received 0 yellow cards and 0 red cards.

We’re spoiled with French premier league options in the defensive midfield, and for that reason I can imagine Doucoure being overlooked. Actually I don’t think I’ve ever come up against the tradeable version of this card, but the red version seems to pop up every other game. At the time of writing Ndombele is about 1,5k and you can get the beast Sissoko for about 15k. The boys with higher budgets will likely go for Kante or Pogba. I’ve got about 100 games with the red version, and I’m convinced that there are a few reasons to pick up this card and justify the price tag of 75k.

Doucoure is an allround baller. The key stats are 87 standing tackle, 86 interceptions and 82 reactions, meaning he will be running around bullying your opponents attacking midfielders, and 94 stamina means he’ll be doing it for at least 90 minutes, 120 if necessary. When he gets the ball the 84 ball control and 85 short passing comes in handy.

The cons are of course the 67 pace combined with 65 agility, meaning he’s not the fastest of midfielders. On the other hand, he has about the same pace stats as Pogba, and actually more than Fabinho, and it’s not like their pace stops them from being great cards. With an appropriate chemistry style, engine or shadow, you can boost his pace and agility quite nicely if you want. I would have liked some more composure, long shots and about +5 aggression, just to boost the ”beast factor”, but we have to remember that it is still just an 84 rated first inform.

The big question for me is, why would you want to use this card over Sissoko, who is 50k cheaper, has the same if not better links, more pace and physical stats, not to mention the huge figure in game? The key word is versatility. First of all Doucoure beats Sissoko in the important shooting department stats, with +11 finishing and +9 long shots. Sissokos passing look better on the face stats, but unless you’re going to take a lot of free kicks with Sissoko, Doucoure will be the better choice when it comes to passing. The dribbling also looks similar on the face stats, but Doucoure actually has a big advantage with +4 ball control and a huge +13 balance, which more than enough compensates for the lack of pace. The defending stats are also in Doucoures favor, with the +6 interceptions and +7 defensive awareness being the most obvious.

To sum it up, with a slight downgrade in pace and strength, you will get a card that is more agile, confident on the ball and not as likely to hit some kid at row Z when attempting a long shot. If he somehow manages to get a second inform in the coming months, we could be looking at a really good defensive or box-to-box midfielder.

I pick this guy in Fut Champions Rewards, and i got a big surprise, i put Shadow on him and trust me this guy is a BEAST with 94 stamina he is all around the field his Interceptions is so good, so try this guy is a perfect match with kante/sissoko in midfield, also his passing is ok and shooting is fine for a CDM much better than kante and sissoko.

heading but in this fifa is not a problem