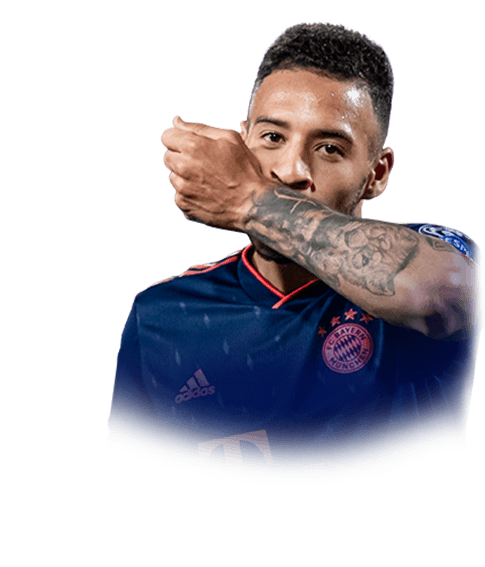 Corentin Tolisso's TOTT card is rated 85, he is 181cm | 5'11" tall, right-footed France midfielder (CM) that plays for FC Bayern München in Bundesliga with High/Med work rates. His average user review rating is 4.5 out of 5 . He has 3-star weak foot and 3-star skill moves, He does not have a real face in-game. Corentin Tolisso has 3 special cards with ratings between 83 and 85. He was born on 03-08-1994 and he is now 28 years old.

I've used many well-rounded CDMs this year - like Allan(86), Seedorf(85), Gullit(86), Veron(88), Dele(87) and I rank them in that order. Because I completed Lewandowski and Gnabry POTM SBCs I was planning to buy Tolisso but luckily I managed to pack him. I used him as a deep playmaker and he surprised me so much that I sold my Allan and replaced him with Tolisso in my main team. The best thing about this guy is passing. We all know how it works this year but this guy can deliver the ball inches perfect.He also feels stronger than the stats says I believe due to his high dribbling stats. He also seem to always stand in a right place to intercept the ball. His little defect is obviously 3 stars skill moves but they don't matter that much this year. I didn't feel anything bad about his weak foot. This guy is a bargain at 50k!

Could be a bit faster

Paired him alongside Kante initially and he would go one for one with him. Interceptions, tackles, bodying players off the ball. He moves intelligently and is always in great positions on the field. Shows up every other meta-CDM in the game (apart from Kante who is the benchmark for every CDM). When I sold Kante, I didn't miss him because of Tolisso's remarkable ability to cover space and track back. Once I sold Tolisso however, things went south, oppositions moved through my midfield with ease and it was honestly like a leaky tap. Have bought him back 4 times and regret it every time I sell him. He will be a staple until someone who doesn't cost an arm and a leg can outdo him. He just does all the dirty work you need a defensive midfielder to do and boy does he do it well!

3 star weak foot, isn't as rapid as DMs like Kante, might find him up with your strikers sometimes...

Well, i have enjoyed using him even though its only been 50 games, he is a great box to box midfielder and just feels like a tank in game

PS the squad i attached is in game, so thats why the chem is off

For me, he stands out when attacking, i use him on free roam and he goes everywhere and ive even scored a few long shots with him, he is a tank and super strong so will outstrength anyone, i use with maestro so he can help in the attack more

he isnt the best defensively, im sure if you put an anchor on him he can be phenomenal but i wouldnt suggest playing him in a holding role, more box to box. He feels a bit sluggish but his strength makes up for it