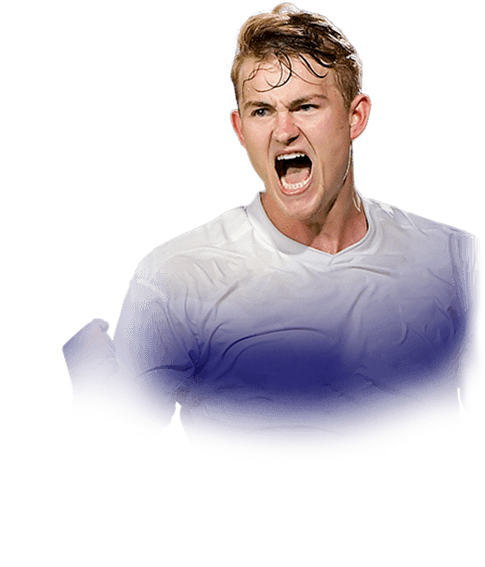 Part II of the TOTY vote includes the second part of the Dynamic Dutch Duo in Matthijs de Ligt.  Centre half is the one position that I have had very limited experience with players.  VVD has been a constant in my squad since just about the beginning, paired with a small array of players from BASE Rio, RTTF Joe Gomez, and Scream Pique, to NIF Militão and Eric Bailly.  While the list is small, the three higher tier options I have used provided a good starting point for comparisons, while the true test stood alongside de Ligt all weekend in the man mountain that is VVD.  In the end, de Ligt was the silent destroyer in the following squad: 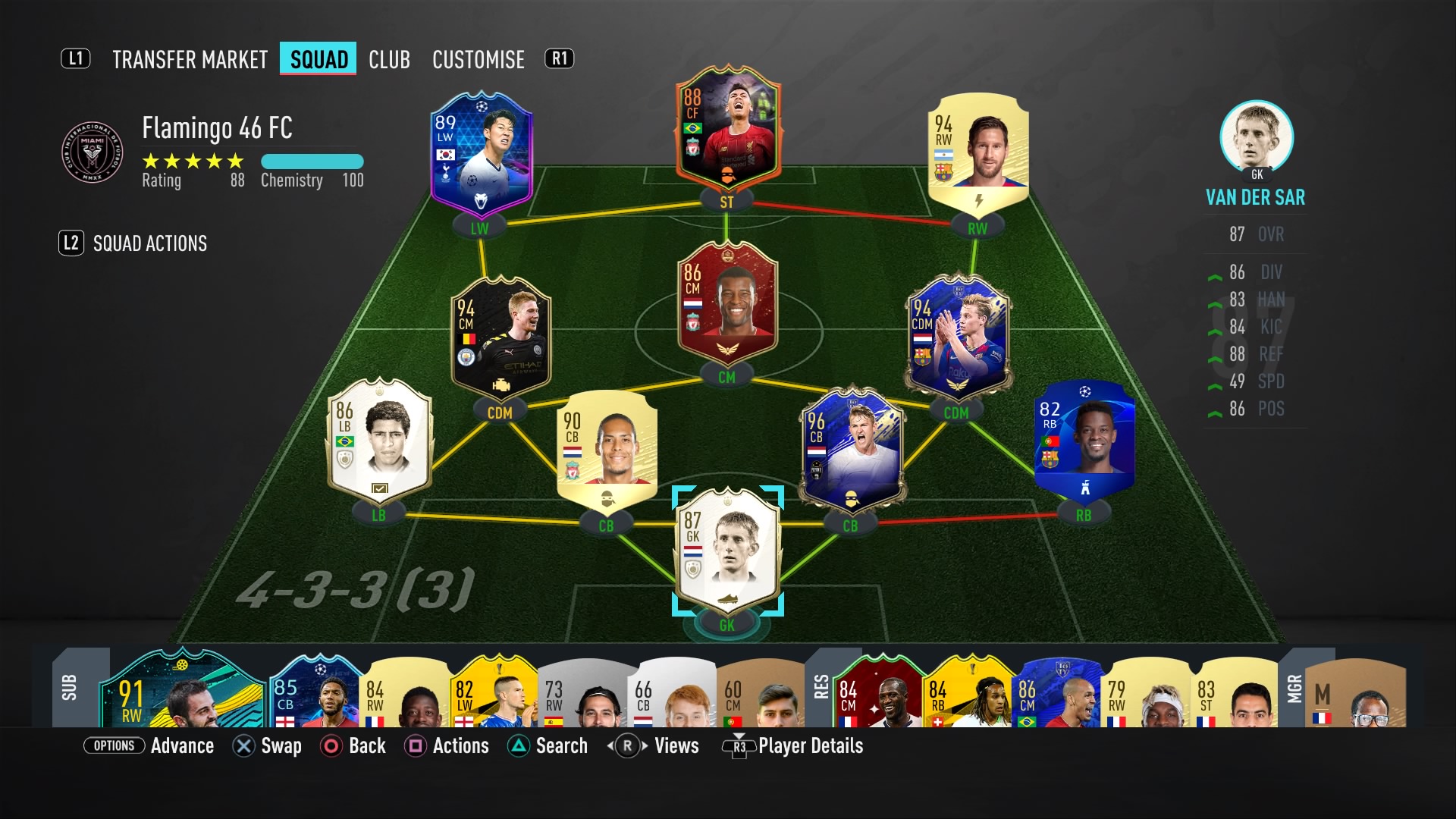 Okay, there is definitely something glitched with these TOTY cards.  On the surface, the statistics are impressive and suggest that there is quality in all of the TOTY options.  But in-game these same statistics seem amplified as first de Jong and now de Ligt outperformed their attributes on paper.  I applied the SHADOW chemistry style to de Ligt entirely for the +15 ACCELERATION boost and of course, this brought de Ligt to a perfect 99 in ALL DEFENSIVE STATS.  It is worth noting that ANCHOR will have the same effect defensively while adding 99 JUMPING & 99 AGGRESSSION … but you give up +10 ACCELERATION and +3 SPRINT SPEED.  Regardless of the chemistry decision, you make this card is going to boss the backline with considerable ease.  It is difficult to put into words the full experience, but I will try my best to be clear and brief.  VVD is a phenomenal defender and his NIF is still more than good enough for me; however there are moments where VVD appears to be struggling and then will come up with a last ditch tackle or interception to alleviate the problem.  With de Ligt, it never ever seemed like he was in that sort of trouble and he was always a step ahead of my opponents.  Obviously, I still conceded goals this weekend, but it always felt like 100% user error or unreliable gameplay.

Much like Frenkie, there are a variety of ways to get de Ligt into your squad.  I was tempted to just lower de Ligt to a 3.5/5 given the lack of a Piemonte Calcio (still can’t get used to that) right back … and no Cuadrado does not count for me.  Even the situation at LB is just strong enough in Alex Sandro’s TOTY nominee version.  So not quite as easy as de Jong, but not impossible either.
On the other hand, the current game strength for de Ligt is a simple and clear cut 5/5.  de Ligt is currently a premier option for CB in FIFA and I would go as far as saying he can slot into the top 5 available.  One of the biggest reasons I have de Ligt in this category of top tier options is his mixture of pace and maneuverability.  Only one other useable defender in FIFA can boast 85+ PACE with 70+ AGILITY & BALANCE in RTTF Joe Gomez.  There are some options not far behind at 80+ Pace such as RTTF Militão, but like many comparisons de Ligt just has that little bit extra.

As de Ligt climbs closer and closer to 1 million coins (currently at 975k) I still feel like he is worth every coin.  The main issue is of course how much are you wanting to spend on your defenders?  For myself, I always overspend on attack and don’t pay enough attention to the backline.  RTTF Joe Gomez “is good enough” and so I use him.  Yet, this weekend I had one of my best finishes in Weekend League and it 100% came down to my opponent’s inability to score.  I was able to be overly aggressive from my normal defending because I knew that a) de Ligt could make up the ground if I did miss a tackle, b) that he would win the ball when I did make tackles, and c) the peace of mind that my entire backline was solid and reliable.  So what is that worth? … a fair few coins in my mind.

Similar to de Jong I don’t want to spend a ton of time on this section because it is obvious that de Ligt is a class option.  Two things I have not added would be the ability to find passes with this card, which was incredibly accurate.  Along with the ability to dribble at pace with de Ligt who was surprisingly quick and agile on the ball.  Then you throw in that this card is a physical specimen with 96 JUMPING, 88 STAMINA, 99 STRENGTH, & 93 AGGRESSION (yet not a single yellow card) and you realize quickly he is the FUT Terminator.

I have said all there is to say, de Ligt is a monster and definitely worth every coin and a run out in your squad.  I don’t usually have fun defending, but I can’t lie de Ligt brought me an added appreciation for how drastically a quality defensive player can shift a match in your favor.  As a final note just want to give you the heads up on the video.  Of course, you can see that de Ligt did not score any goals this weekend, so what I did was took the final three matches I played in WL and picked out de Ligt’s involvement.  It is nothing spectacular, but it does show how smooth and agile his card is, and the quality of his tackling.  If you are like me and didn’t come close to packing a TOTY, treat yourself to a market acquired option … and de Ligt wouldn’t be a bad place to start. Cheers for reading. 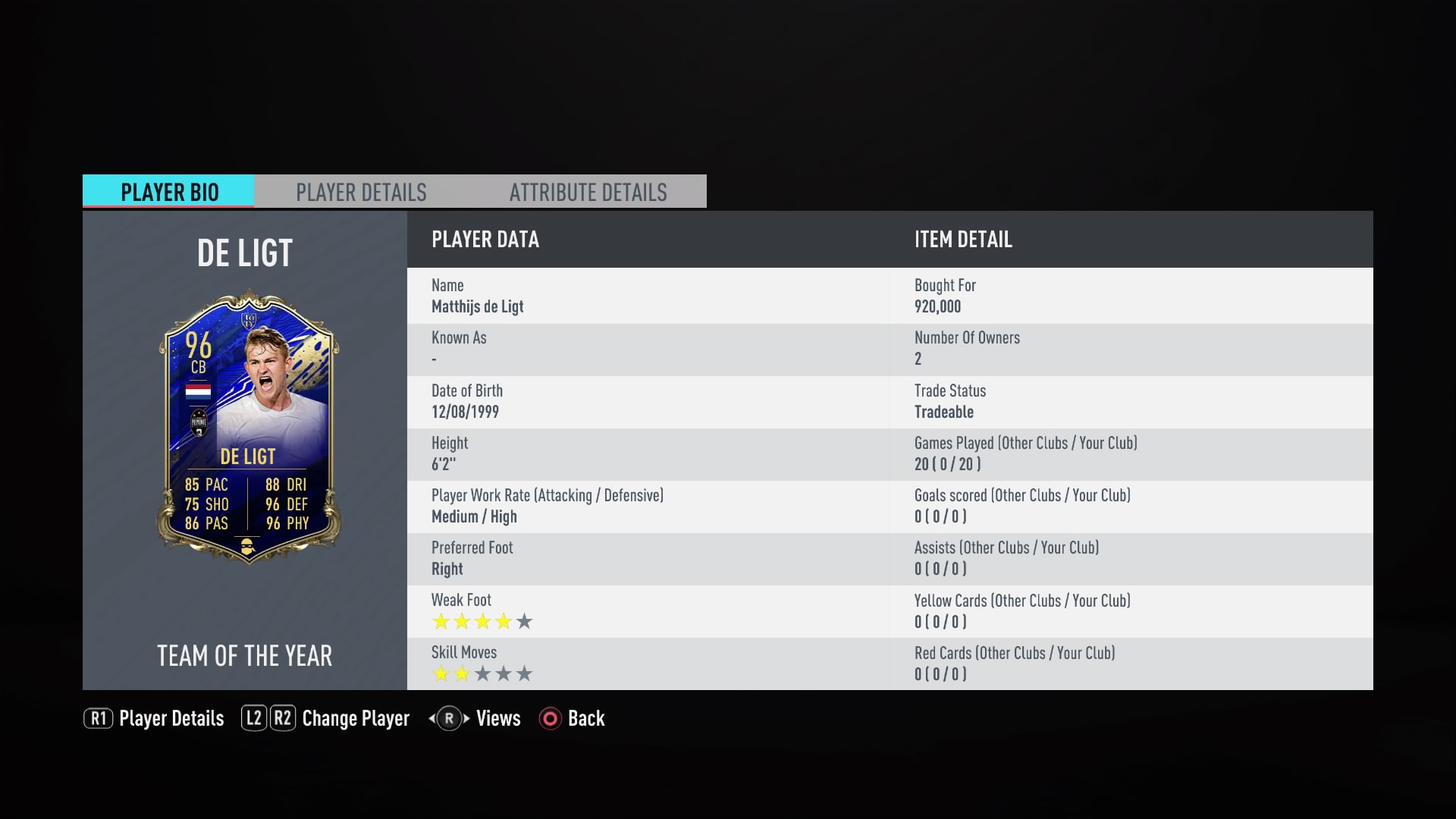 Managed to pick this card up for under 900k during the promo replacing mid icon Blanc. For this price and even as his price approaches 1M, he is still a bargain considering what people are paying for high end icon CBs. He has the ideal workrate for a CB. If you can pair him up with Van der Sar from icon swaps he gets a green link. You could get an end game CB in January for less than 1M coins. That is unheard of for FUT.

He is an absolute boss. While not being controlled he never runs up or gets out of position. He is incredibly quick and agile relative to other popular CB cards. Excellent passing and composure with a 4 star weak foot. Tha'ts very rare for a CB. I have slid him up into the CDM role and he is a tank in that area of the pitch as well. He has improved my team and my playing performance massively.

Can play CDM is needed

Requires a Shadow chem style to boost his acceleration by +15

I dont usually write reviews, but i have to do it now for this absolute beast of a card.

I bought De Ligt pretty early after he came out, and gave him the WL, together with some games in rivals (Div 2), and i have to say i was impressed by how he performed, obviously you expect a lot from the second best defender on the game, but i didnt expect this much.

I am a player who struggles a lot with defending, and have tried all different tactics, drop back, pressure on heavy touch etc. But when i brought in this guy it was so much easier, this guys AI defending is on the same level as van dijk, and he literally has everything you need for a defender.

I played with Maldini, Virgil and Blanc last year, but this guy is miles ahead of what they were, and he is without a doubt the best defender i have tried out this year.

Pace - The guy feels rapid, and with his 91 sprint speed he outruns most attackers, but you could maybe feel his acceleration in some occations, but not a problem i would say.

Passing - With his 99 short pass, 96 long pass and 4* weak foot, his passing was class, and he never misshits a pass.

Dribbling - His agility and balance is more good enough, but being big he aint no messi in the way he moves. He also has 94 Ball Control and 99 Composure, which makes him very reliable in most situations.

Defending - Probably the best about this guy, perfect defending for me personally, nothing more to say than that tbh.

Physical - Again spot on here, perfect jumping, 99 strength and 93 agression, what more could you want from a defender really.

Price - For some he might be very expensive, but it depends on the level you are playing at, but for me he is 100% worth it.

Agility and Balance - This aint a problem, but more of a thing that could be improved, you can feel the size of this guy while jockying with him.

Links - Could be a little tricky to link without icons.