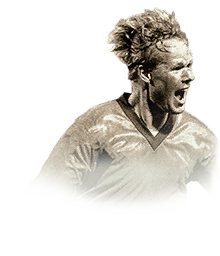 As soon as I had seen his stats I wanted to try him as a cdm. For a long time, however, he was way too pricey for my budget but I recently finally managed to afford him. I started with 5 at the back to move him into cdm at the start of the game and he did a great job for me.

Pace: I played him with a shadow so his pace was on 92. He definitely didn't feel slow and won many races, but from time to time I noticed his base speed being relatively low.

Shooting: His shooting stats look unreal and really made me want to try this card. His finishing inside the box felt okay/good, but I really noticed it being "only" 85, so he did miss some easy goals. His shooting from outside of the box was very decent and this guys secured me some amazing last minute screamers.

Passing: His passing was nothing special to me. His short passing is on 90 and it was very solid, I didn't have the feeling of a Messi or Pirlo when building up a game with him, but he was very solid.

Dribbling: I didn't expect a lot from his dribbling and especially from his agility, but he really surprised me in that regard. His reaction and composure were great, but on the ball he didn't feel that great with his dribbling stat being only 80.

Defending: His defending was very good. He intercepted a lot of passes and basically won every tackle (in good gameplay). With the shadow chem style all of his important def stats are 99 and you definitely notice that. This guys will provide you with some solid defensive controll, however his height isn't the best for a cdm (imo), which eventually will result in some missed interceptions.

Physicality: His physicality felt good, but not special. He neither has the best physicality stats, nor the body type to really convince in that regard.

All in all I really enjoyed this card as my offensive cdm, however, I eventually decided to sell him. I felt like there was just something missing in this card and he didn't have this "op feeling" such as a De Jong toty, Vieira, Gullit or those top tier cdms have. Compared to other options with the same price, though, I can really recommend him. He was fun to use and decided some games with important and beautiful goals. If you're looking for a solid defensive player who can control the game with his presence and shooting, Koeman is a really good choice for you.

So it’s late August, the games in its final throws & I’ve been experimenting with various CB’s to try and balance my back line. Over the past few weeks I’ve used TOTSSF Ramos, Upemecano. Robertson (LB), Varane & UCL showdown Alaba along with PIM Maldini, Nesta & Campbell- all with varying degrees of success. This card was not really on my Radar, until it dropped from a PIM SBC, so i decided to give him a try in weekend league s i was fed up of Upemecano having to be subbed due to stamina in tight games.

Firstly- this is not your primary defender card. If he’s last man & most end game strikers are past you- you’re in deep trouble. He needs to be partnered with a last man defensive rock like Ramos or Van Dijk to get the best out of him.

So sounds pretty worthless yes? Wrong- you just have to alter your play style. Where this card excels is quite unique- shoulder to shoulder with an attacker- your coming away with the ball. He’s done multiple times against TOTSSF Ben Yedder, Benzema & PIM Pele- He buzzes around other CB’s sweeping lost balls & then is comfortable playing the ball out with his incredibly high passing & dribbling.

he feels like a high end CDM but the security of a CB. Particulary in the box, he relieves pressure from rebounds & runners with the skill base to really initiate unexpected counters from runs & crossfield passes.

Where this card really shines is offensively- he’s continuously making darting runs down the Center of the pitch, dispossesing opponents- intercepting in the channels then laying off. Multiple times I’ve found him pushing into the final third. Yes, a few times I’ve fought out at the back with him but it’s feels like I have an extra CDM & my possession stats have rocketed as a result. he’s also incredible at set pieces, Particularky long range free kicks- I’ve already scored a few far post 30 yarders with him. Just ensure he doesn’t default to corners- whilst great, if the opponent counters even with shadow he doesn’t have the pace to make it back.

i’ve finally settled on him & Ramos as my CB pairing- I’m conceding a few more against the best opponents in 1:1 scenarios- but the pay off in possession, pressure release in crowded penalty boxes & initiating counters is truly worth it. This is is the CB for those who don’t mind conceding so long as they score more than the opponent.