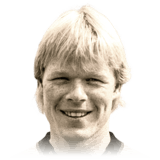 I got this card by doing the Icon Swaps challenges.. I was really torn between him and 85 Seedorf but in the end I picked Koeman. And I don't regret it a single bit! What a game changer! This card has been so crazy good for me. I'm a Gold 2/3 in WL, but after getting this card I managed to get Elite 3 for the first time! Normally I would concede 2-3 goals a game, and that would make me lose.. After the arrival of Koeman I rarely conceded more than 1 goal, which helped me win a lot more games! I like to play out from the back and Koeman makes it easy for me with his high passing stats. He's scoring free kicks for fun, and he is a boss in the box. You could even use him in a 5 back line and move him further up the pitch in game if you need to. I used the Shadow chemistry style which will give him the required pace to battle the oppositions pacey strikers! If you didn't get him in the Icon Swaps I would recommend buying him if you have the coins to pay 500k for a CB.

Pace: Easily keeps up with the quickest strikers, as well as he can drive forward with the ball himself to get an extra player while attacking.

Defending: Literally nothing gets past him!

Passing: He is really useful for me during the build up play because of his passing stats

Physicality: Its extremely rare that he loses a duel or gets pushed of the ball

Dribbling: Didn't really notice any issues with it, but I can see that people might have a more difficult time if using him further up the pitch.

Stamina: Didn't notice any issues with him, could easily play 120 min if needed to.

Got him from the Icon Swaps because i need strongly needed an Icon CB to link with David Luiz,Van De Sar and i pretty much knew what i was getting cause i have used him on a draft.AMAZING CB partnership with David Luiz also really useable as an CDM while i was doing Odegaard in rivals.He also has an amazing shot power and freekick accuracy,he has 8/11 goals from free kick and 3 posts (EA ''FIXED'' that issue...) and also scored few amazing goals as an CDM from long distance with incredible shot power. He also improved my defending A LOT and improved my WL rankings

He is literaly everywhere in defence

I would like to appolegize for my english because i am a foreigner. i first bought this card for the meme and i didn’t expected anything from him but when i was actually using his card i noticed that he is a really solid striker! you can shoot from any angle you want and you will always have the possibility that it can co go in due to his shotpower it really is inmense that is what makes him so special. his passing was also outrageos good for a striker he layed the ball behind my opponent his defence like this man is pirlo. i actually managed to score 4 free kicks with him from the roughly eximinated 10 taken so as you would expect he really is amazing in free kicks. you know that cornors are really hard to score this year when you let koeman take the corners there is a possibility that every cornor could potentially be a goal the swerve that this guy adds on the ball is on another level. it also is really handy that he is a cb because now i can actually defend with my atteckers like i can properly pressure my opponents. we are not going to talk about his dribbiling because there littarly is nothing good to say about that. his weak foot by the way feels way higher than 3 star i am scoring bangers left to right with his weakfoot it really is incredible. the goal to game ratio is right. i may have forced a few balls to him hahahah