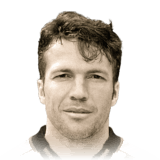 After trying a handfull of formation i settaled on 4231, i had a packed pulled Kante and a wanted a simliar player to him and that player was Matthaus. I swap him with middle desailly in game. Matthaus is an aggressive kante, he plays inbetween Kante (drops between defenders) and messi (come back on defeence) snapping up and balls that come his way and is great to control to cut passing lanes or win the ball back as he turns on a dime and has speed to recover any mistakes you make.

This guy is easily the best icon for <950K I have ever used. He is amazing. He plays so much like Gullit for fraction of the price. The high/high work rate just means he is everywhere on the pitch. He offers defending presence, creative playmaking and if you wanted a finisher, just pass him the ball and he will rip the back of the net. His long shots are incredible. Both finesse and power shots.

You can either play him as CB in a 5 at the back formation and switch him to CAM or CDM depending on where you need him and he will be incredible. If you're not bothered about 10 chem, you can play him as a CDM with a german manager for 7 chem and he will be just as good.

Guys I cannot recommend this guy enough for the price!

?I decided to do the base icon sbc, I saw the German flag and tbh I thought it was Lehmann but when I saw CB I forgot that matthaus existed… lothar matthaus is a mix between a perfect CDM and A RB. I played him as a CDM in the 4231 and the 41212(2) but he performed better as a secondary CDM beside Michael essien (4231). Defensively he is godly. His shot power is amazing banging in long shots from outside the box a lot.. he is very reliable to cut passing lanes and to be on balanced in the 4231.. if you are thinking of buying him I say go for it as he is worth every coin you are going to spend on him.

I used the shadow chemistry style to boost his pace which felt like 90-95 in game. And his defense stats too high 90’s all of them. He is a well rounded cm/cdm.. if you are buying him to play at CB its not worth, Either play at CDM or RB.. i swapped him with ramos moments a few times. basically play him anywhere in the field lol.

Matthaus is really similar (as a player to use) to ruud gullit but he is smaller and his hair is short. If you have the ball make sure to shoot with him in the top right corner using Powershot :D.

Overall really recommend him.. such a beast.

Plays anywhere on the field