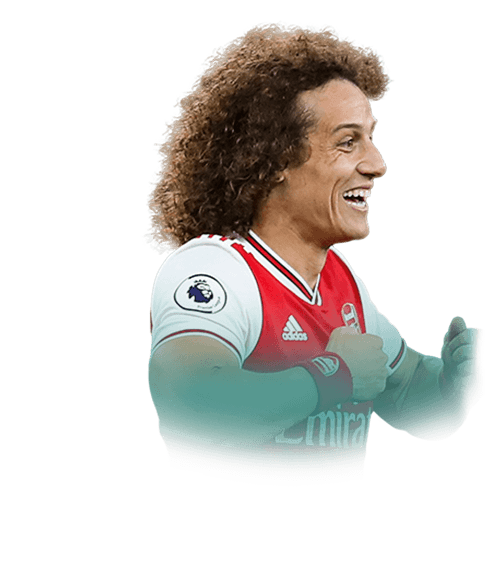 When the SBC came out, I just think who the hell is gonna do that overprice SBC. Nearly 500k för an untradeable CB with untradeable packs. But change your mind, David Luiz is probably the best defender in the premier league. He feels really strong in-game and his massive hair makes him even better. He can win most of the headers and he can kill somebody likes Romulo Lukaku.

Aggression: The high aggression makes him feel very consistent when he is in a one on one situation. The strike can't pass him really easy.

Sprint speed: He is outstanding fast in-game. (With shadow). He can catch a striker with high speed really easily.

Ball control: I don't know why, but he is one of the best dribblers for a CB. But sometimes i feel a little bit clunky.

Pass: Long pass and short pass are brilliant. U can make some assist from your own half.

Header and volley: WOW, he can win every header. He scored 2 corner goals in one single match, absolutly insane.

Stamina: 72 stamina isn't so good for a CB, but it doesn't really matter.

Ok. So when this SBC was released, Im sure everyone thought the same thing. Those face stats look sick. Unfortunately, after heading INTO the SBC, those requirements actually MADE us sick. Damn. 500k for an untradable Luiz. Pretty heavy EA.

Anyway, after rinsing my club, consisting of over 2000 players, and around 2m coins into upgrade packs, the only blue I had a claim to were the feelings in my heart. Alas, it wasn't meant to be.

I did, however, have a good number of high rated untradables in the club, so I drowned my sorrows in that Luiz SBC.

Now, looking at his stats, he has fantastic passing, good pace, brilliant physicals, good work rates and decent dribbling along with great reactions and composure. I know what you're thinking. Slap a shadow on him and he's a top tier CB. But hold your horses, dear reader! Don't head down to the old town road JUST yet!

I decided, you know what. I have a red VvD and Nesta. Let me chuck this guy next to prime Keane in CDM and lets see what he can do. Oh boy...

The dude is literally everywhere! Whipping his hair back and forth that midfield like a prime Willow Smith!

First off, his physicals: This dude has 88 strength and 96 aggression. So not only can he hold off opposition players when shielding the ball, but this dude is so aggressive, if he needs to TAKE possession, he'll do dirty, Ric Flair-esq manouvers in order to get the ball. Honestly. The amount of times I've shoved people off the ball and gained possession with this dude is crazy. It's so impressive!

Passing: Spot on. It's like Iniesta and a massive bush had a sordid affair and gave birth to this pin point precision passing mothertrucker

Dribbling: Is good. he doesn't feel clunky. There are some CDMs with his body shape that turn like a stranded ship, but with an engine he moves about lovely. kinda like refridgerated butter.

Shooting: I don't get into a lot of shooting positions with him, but he literally just won me a game in the last minute with a very powerful outside the box finesse shot. It was a thing of beauty. I took a video of it and sent it to my family and work whatsapp groups. I'm sure they'll also comment on how exquisit that curl was. 94 shot power by the way. Definitely feels right.

Pace: He actually feels quicker in game than his pace suggests.

Defending: Along with his strength and aggression, his defending stats are awesome and definitely show in game. He gets the ball so easily from people.

Work Rates: It SAYS medium medium, but honestly the dude runs about the pitch like he's a renegade hound! He's like the butler from Mr. Deeds. He's there in midfield, then I make a massive sprint with Neymar to the box, and the dude is waiting just outside it like 'Sneaky sneaky, sir!'. Then I lose possession, opposition runs the other side of the field, and he shows up in MY box out of nowhere to give them a Ric Flair low blow and gain back possession. 'Sneaky sneaky, sir!''

All in all, I'd say for a CDM I'm really happy with this card. He impresses me everytime he plays. Some players can go missing in big, sweaty games, but Luiz is everywhere and always pitching in up top and in defence. I can't see anyone replacing him until TOTS at least. By far my favourite CDM.

As for my credentials, I'm mainly Gold 1. Creep into Elite 3 every now and then, Also Div.2 in rivals.

Winning back the ball via Strength and Aggression

Stamina. Not a big problem but he's rummaging through his hair for an energy bar around the 80th min

Let me start saying that David Luiz is the most reliable tackler i have played this FIFA. The combination of his physicality with 99 standing tackle makes him, cartainly, an end-game card. His strengh, body type and aggression can bully anyone off the ball. Outplayed FS Tomori, VVD and Diego Carlos in all aspects (high caliber CB i played with).

PACE: Perfect for a defender. Of course it could be higher, but he wont lose in a sprint due to his physical stats. If u somehow make contact with na attacker during a sprint, it’s a guaranteed recover.

SHOOTING: Scored twice with him from long shots after corners. Of course he will miss open chances, but thats acceptable even for TOTY VVD.

PASSING: Amazing. Could easily play CDM if u have a more dinamic player alongside him (Firmino Scream, De Jong, Seedorf types of player). His long passing is amazing, making field turns very easily. With good reactions and ball control, his ball exit from defense are Zidanes level.

DRIBBLING: Also amazing. Feels like he always have control of the ball. Better dribbling than prime Petit, my 200 games CDM. Dont worry about the 64 balance as he’s not very tested during the game.

DEFENDING: HIGH CLASS. Everything u wish from a defender, he delivers it.

?PHYSICAL: Also HIGH CLASS. Everything u wish from a tank, he delivers it.

Bullys anyone off the ball

Long hair, very easy to identify on the pitch