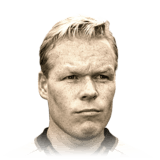 Like a big number of you I did the prime icon pack, and luckily I got Koeman out of it, why luckily? At this stage of the game you want a player that improves your team, as well as a player that is fun to play with. Koeman does both of those things for me.

During the 30 games I played with him (14 in the weekend league and 16 in division rivals) I tried him on various positions; CB, CDM and CM. And honestly, he does not disappoint on all of those positions. In general he felt very present on the midfield, he is were you want him to be, he doesn't make dumb runs and his defensive position is near perfect. Aside of that his shooting is unbelievable for a defender/midfielder. Out of the 4 free kicks he took, he scored 2, and approximately 8 out of the other 12 goals were long shots.

His pace, together with a shadow card is quite decent, of course he doesn't catch up with most wingers used nowadays, but in the midfield his pace doesn't annoy you.

His shooting is simply amazing, aside of his finishing in the box it's perfect.

His passing, especially the long passing, is close to perfect too. Numerous times he sends Atal or Neymar away with a perfect pass.

Koeman's dribbling is the only downside of his card, he feels clunky due to his low agility, but due to his high strength it's quite hard for defenders to get him off the ball.

His defending with shadow is close to perfect, his defensive position is perfect, his standing tackles are always on the ball and his sidings do the job, sometimes he recovers the ball without me even tackling.

His physical is quite decent, his stamina is enough to last the full game, and his strength and aggression were good, yet not fantastic.

If you packed him and don't like him at CB, try him at CDM OR CM, there his stats convert much better in game.

If you thinking about buying him, my advice right now would be not to buy him at CB for 600.000 coins on play-station, yet if you're looking for a CDM, he's close to perfect, and for that position i would buy him foor the 600k.

Please feel free to correct my English as I'm not a native speaker and always eager to learn. Have a nice evening ;)

When i packed him i was quite happy but it turned out that he plays even worse than a 80 Rated Joe Gomez.

Everything is horrible including his shooting.

Looks good in your Squad

You can shoot penatlys with him