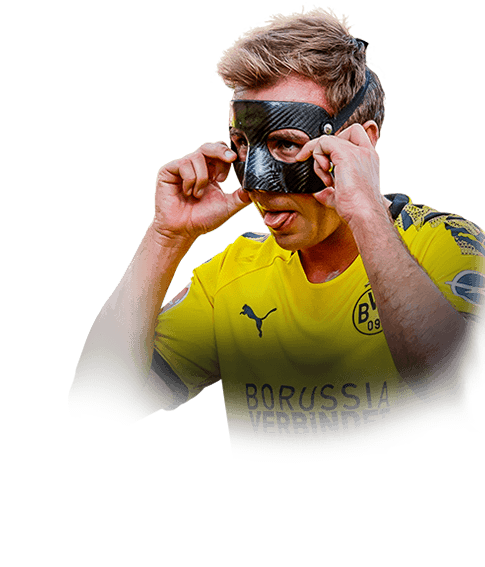 This card is a near-perfect card, but let me say one thing. The dynamic image is so attractive that I would get it just for that. Paired up with a Flashback Witsel is near orgasmic looking at. I am a gold 1 player and at one point, my ELO was very high so I came up against some very good opponents. I played him at CAM in a 4231 and he was great there. I would not recommend him anywhere else because the passing stats and dribbling would be wasted and he does not have good enough pace or shooting to play at ST or the left and right CAMS. He dribbled very nicely so no need to improve that. I went with a hawk on him because I did not really want to spend on a hunter but I would improve the pace a little more. The shooting is on and off. One game he blasted multiple in with his left and others he can't put it in with his right (strong) foot. He has finesse trait but I do not notice it. The finesse is not as crisp as I thought it would be. Other than that, his passing and dribbling are great. His weirdly okay defending stats as an attacking player and you can tell he has those stats when he tackles or automatically intercepts. His 80 strength is noticeable but he does have a smaller build but it is kinda chubby so it helps to keep him on the ball. Overall, I believe this would be the best option out of the 3 choices. His stamina is fairly decent with his work rates and can get in at least like 75 minutes but manages through the whole game. Compared to Headliner Reus, he is much more agile, obviously shorter and finishes fewer chances but I would go Gotze taking in consideration of all the stats. Great card and the BEST dynamic image in game 100%.

Defending for an attacking player

Finishing but it may just be garbage gameplay

Strength but not really at the same time.

This is as I said, a near-perfect card and I really recommend picking this.

When the new season objectives came out I was absolutely determined to get this card. As a Dortmund fan I was extremely excited to use him when I managed to unlock him. He is a very solid player and in my opinion is better than 89 Reus and tottsf Brandt. He is a very good option for a German Bundesliga cam if you are willing to grind for him. His dribbling is by far the best aspect of this card. His control and ability to do quick turns in tight areas is very very helpful. He can also dribble around defenders with ease. The shooting is a bit lacklustre in my opinion. He misses some one on one chances that should be buried so it can sometimes be frustrating. However the passing on another note is marvellous. His passes are absolute lasers not off by one inch. The ball he plays are insane. Sometimes I will try to just launch the ball up field and I'll hold triangle and somehow with his incredible passing the ball will find someone. His work rates are perfect as I always manage to catch him running forward and he tends to make quite solid runs. His defence kind of surprised me tbh. The card shows 60 but that 80 strength helps quite a lot as he is able to push quite a few players off the ball. His stamina is quite decent too most times he is able to last the full length of the game and finish with about 1/2 a bar of stamina.

That dynamic image tho, its beautiful. Nice little bonus to his face pop up on the pitch when you score with him.

His finishing can be kind of lack luster sometimes.

Free kicks aren't always accurate but not a big issue for me as I have other free kick takers.

Cm- I used this guy at cm while doing objectives and he was non- effective. Cam-This is his best position. I use him on stay forward and he has 10 assists in 6 rivals games from there. His passing is perfect. St- Although not his best position this is where I use him and where I enjoy him most. However, he has to play in a 2 with a quicker striker. In this position the tactics I give him is a false 9 which allows him to play through the quicker striker.. With a hunter he can out run many defenders and has a decent shot. I use him on 8 chem and he still amazing. I hope this has helped some people and even if you're not gonna use him just take him for that dynamic image. ive used this card in div 7

Pace ( if with a hunter)

if playing him cam he sometimes gets bullied off the ball.