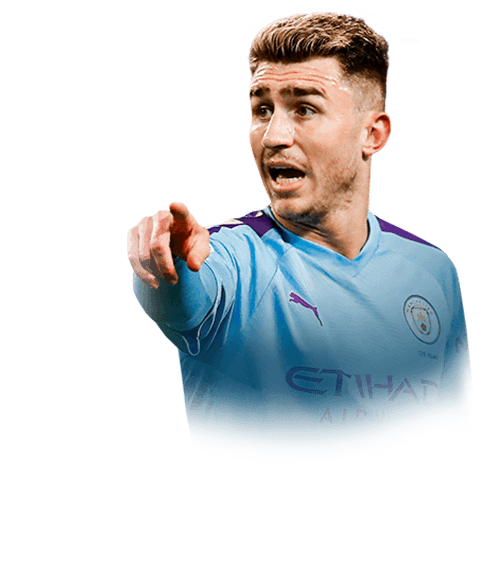 Aymeric Laporte's Player MOMENTS card is rated 90, he is 189cm | 6'2" tall, left-footed France defender (CB) that plays for Manchester City in Premier League with Med/Med work rates. His average user review rating is 4.6 out of 5 . He has 3-star weak foot and 2-star skill moves, He does not have a real face in-game. Aymeric Laporte has 3 special cards with ratings between 87 and 90. He was born on 27-05-1994 and he is now 28 years old.

Here we go a review for the boys that are waiting to know if he is worth the grind and the 5 crosses in rivals. First of, he is generally REALLY close to his normal card but upgraded stats of course. 10+ pace and the rest are less than 5 upgraded. He looks like a decent center-back for a low budget team or for someone who doesn't want to buy Van Dijk, Scream Otamendi or Young Stars Tomori. But, He has a couple flaws! I did't see much of a difference between him and his normal cards. He does do well in defending don't get me wrong but, the lack of pace, passing and dribbling makes him somewhat harder to use. For example, I used him in FUT Champs this weekend for 5 games and I usually pass around the back but, sometimes I want to cross to my full backs, his crossing usually gets intercepted or does go to my full back its a 50/50 chance. Dribbling wise I HIGHLY RECOMMEND not trying to dribble your way out of a tough situation. Even if he has GREAT physical it's not enough for him to get away from tough situations. Good things about him though is his defending good. He usually gets the ball from the opponent and the strength does help with that. Really his only pros are his defending and his physical. Finally, I did put on him a shadow and a anchor, I would recommend to buy a shadow to upgrade his pace to 86 which is 10x better, it makes him able to somewhat catch up to strikers and wingers. He is decent for low budget teams but his objectives are a little annoying. Like EA really, score 5 crosses in 5 separate RIVAL WINS!!!!!! Not cool. The other three objectives are relatively easy. I recommend for the La Liga objective to buy or use Joao Felix. His finesse shots from outside the box was really easy to do and if you need a french striker with 3* Weak Foot I would go with Griezman, Haller or Mateta. They all have there strengths and weaknesses but, they are the better ones. In conclusion, If you need a center-back or a SBC fodder he is good, make sure he is paired with a good center-back like Schar, Davidson Sanchez, Lenglet, Varane etc. to really get the best out of him.

Thanks for reading and i hope this helps make a decision!

If you haven't used your Laporte moments as a SBC fodder just yet, please read this, try him and then decide.

To start with, I had no intention of playing the card because it did not fit my main team and the 74 pace rating felt nowhere near an endgame defense stat. But then EA gave away Jimenez and Ayoze and I was able to build a strong second team that fit Laporte so I decided to try him. And what an epiphany... Even though the card looks quite slow, he feels nowhere near it in-game. But the best part about it is he never misses an interception or a 1v1. He doesn't get pushed around, he doesn't do that weird animation some defenders happen to do when they lose a duel. He is focused and reactive, therefore he puts his foot down decisively and accurately. Honestly, a French CB from PL being that good in game would be a crime not to be tried before using it in SBCs.

Pace : in game is clearly better than 74, didn't even bother to slap a shadow on it

Defense : can't lose a duel, can't miss an tackle, can't lose his focus. Opponent stays in his pocket 90mn out of 90.

Strength : if he's stronger, he'll push with the shoulder, if he is not he'll put himself between the ball and the opponent. Only wins here.

Overall technique : you'd expect the Moments card of Guardiola's best CB to feel more at ease on the ball but still, not really his job to keep possession.

TI was just grinding the objective cards EA put out for TOTSSF. (i.e Thuram, Toney and now Laporte) After completing all the icon swaps tokens whilst simultaneously completing objective the TOTSSF players, I had a couple of objectives left for Laporte. I was tempted to leave them as they were and not bother with him, however I managed to complete him whilst doing the Jimenez and Ayoze Perez objectives and oh my was it worth it. His pace is a lie; it felt much higher than 74 in-game (no pace boost), he has the High & Average body type (i.e - VVD, Joe Gomez body type) which makes him able to bully attackers off the ball. Laporte Genuinely felt like an icon card. I'd stuck a backbone on him purely based on the fact that it was in my club and this guy was ridiculous.

real solid defender. great tackling and is really good at bullying people of the ball. since he is free i definitely don't regret grinding for this card he is a great step up from his base card. really useful and has won game for me.