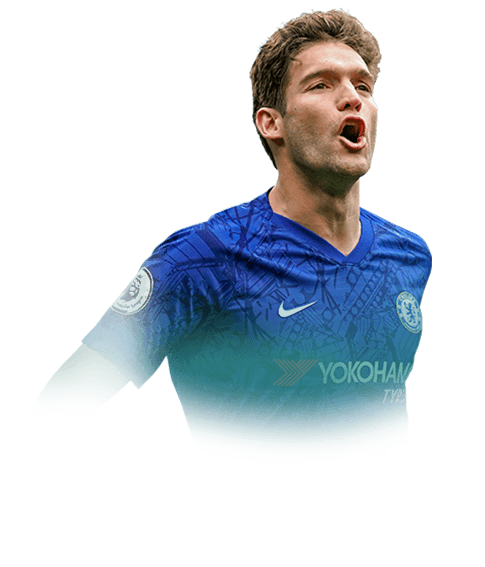 Love this man. As a Chelsea fan I just had to do him. The value for the card is a bit sketchy, but you won't be disappointed. I submit Hierro for him expecting to use him at center back until I realized he had high/high work rates after I submit him, so I crossed that out. So I tried this card out at a box-to-box CDM. This card is mental. Wins about every tackle, wins all aerial challenges, catches to anyone and everyone. His passing is phenomenal, hits every pass, especially his long passes. His long shots and his headers are also great. I rarely score headers (like everyone else lol) but this man scores all my near posts crosses. And once the ball falls to him at the edge of the box, most likely going in. His free kicks are also great. When I was losing, I put Alonso up top and he did the job for me. I put him as a second striker in a 4-1-2-1-2(2) as the right striker and he finished all of my finesses. Great card. Used him at left back also, he's just as good there. So I think he's worth it. Only downside is his dribbling, he takes really long strides sometimes and ends up losing the ball here and there but he ends up recovering it. 9/10 card. Would be 10 if it wasn't for the price tbh. Engine best chem style to boost agility and balance.

Hello everyone, i did this SBC because i had the 91 Alonso from last year and he was fenomenal, and holy crap this guy is no different.

In my opinion he is even better than the card from last year. This guy he's strength is more what it says i can tell you that. He is so responsive on tackles and knows how to read the game perfectly. Every pass and cross comes with an INSANE interception. But then we did not talk about the FreeKick Accuracy, wich is basically 100% goal. Also he's length is very good 1m88.

If you can get your hands on him go ahead because he is a gamechanger, even at this stage of the game.

-Pace is incredible, more than it says on the card + Pace with length

-He will never miss a pass, NEVER, also the freekick accuracy is a joke 100% goal like i said, 99FreeckickAcc 97 Effect 97 Shooting power.

-And of course the Physical, strength 86 what actually in game feels like 95, and Stamina 99 so perfect.

-Oh yeah Shooting is very good as well, the longshots are the best.

-There are no Cons for me

Around 3-4 weeks ago I finally got enough coins to do this sbc and I really looked forward to playing with him. After I completed the sbc I used him as a LB thinking he would be really good with the pace he has. Unfortunately even though it says he has 88 pace it and I used him with an anchor on 10 chem he did not feel like that fast. At that time I was really disappointed how slow he was. For this Weekend League for the Ligue 1 TOTSSF I bought Grimaldo and moved Marcos Alonso as my second CDM. And he completely turned up. He was just amazing, with the 88 pace he really felt good in that position, with his height he won a lot of headers and got a few headers in also for me. He was really strong and his defending was top notch. His passing was really good made som key passes in the games and did also made a few amazing through balls. I also tried him at the free kicks and from now on he will take all my free kicks. He did score a few goals and the amount of power he has in his free kicks is just amazing. Right now he is around 204k on PS, 189k on Xbox and 221k on PC and he is there for the rest of the game, I really think he does worth the coins, and what is amazing about it is that you can do him cheaper which makes him even more worth the price!

Pace (as CDM imo with anchor)

Shooting (Did miss a lot of big chances, yes his finishing is little bit low but my Ndidi did finish some harder chances then him)

Dribbling (Does feel heavy sometimes when he turns around)

I was waiting for the new sbc of the day to come out. After I saw that it was alonso i thought meh... but then i saw the PREMIUM! At first i laughted as it was funny to see a PREMIUM SBC. Also i had Fuchs FB at LB and i didn't need him. Most importantly though was the fact that he needed an 85 and an 87 squad which i thought expensive. When i checked his price though i saw that it wasn't that axpensive. Also to get that out of the way, no i am not a trader or a pay to win player. i only play the game and never trade, also i never added coins or fifa points and only play the game for 1 month so no i don't have money. To be honest i am broke now but it's okay cause i have a good team. To do him i had to throw out of the window the opportunity to get an EPL guarantee and tbh idc rn as this man made my team a lot better. So about the card, i only played one game cause the card literally just came out but it was enough. This card is amazing in defence and steals every pass and the ball from the opponent. The problem is the attack. He feels heavy and can't dribble easily with the only bright thing about his attacking skills being passing. So to summ up he is not a great LWB but at LB and a defensive one he is great. If you can do him with untradeables like me i think it woths it but idk about the 200K. Also don't expect him to be like the fifa 19 UEL card he had!

Pace without the ball