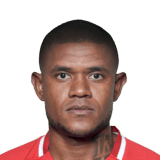 This card is honestly pretty good. I know that there were some people that wanted to buy him, but wanted to read a review to see if its the right choice, and i can honestly say for those coins its a good deal. I used him with a powerhouse because i unlike many people dont need lots of pace on my CDMs, but of course if you do just give him a shadow. Anyway, Its a good card. Pace for me was pretty nice, passing with a powerhouse was good, and the physical stats were really nice. The 99 stamina could also make him a great box to box. 3 star skills for me was fine, dribbling was nice, hes the right height for a CDM, and the defensive starts were very good. The only thing lacking was the shooting, 78 finishing and 2 weak foot, might be a problem for some people, but overall a pretty solid card.

His presence is insane, thanks to his high aggression reactions and strenght, he is a kanté that feels so much better on the ball.

Yeah his finishing is shit and his weakfoot ain't that great, but as a sentinel that'll stay in front of your cb, he will do an amazing job. He feels great on the ball, his agility and strenght makes him a really good box to box cdm, and his passing is amazing.

In front of the goal, he won't be that great, but that's kinda expected.

So first off i only ever write reveiws if i absolutely love the card, or i feel they are underrated and thats exactly what this guy is. i have played a full weekend league with him and im a casual player who hits gold 3 almost every week.

When i first saw this card i was so excited to use him, then i remeber i have no coins because i do to many SBC. but when he came out in my red picks i was super happy. I play him on 10 chem with an anchor chem style as a CDM in a 4231. he plays along side TOTS Hendo and in front of Flashback Miranda and Boateng.

he is on the same level as all 3 of them in his defending, he is above all of them with his physicals. heis a little lower then hendo with his passing but thats to be expected.

To go along with all that i play him with stay back while attacking and cut passing lanes also cover centre. hendo is on a balanced instructions so sometimes i find its just anselmo left in the middle. he is more than capable of taking on anyone, or holding up play to allow hendo to get back.

If ypu can link him into your team, even on 8 chem i would highly suggest it as he is fantastic.