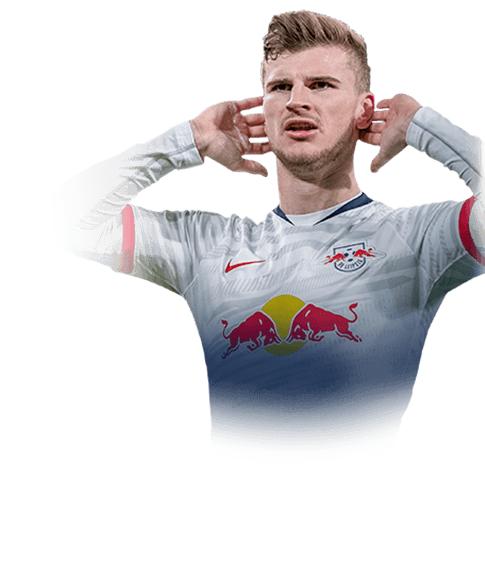 His real-life stats are currently 3 goals and 1 assists in 7 matches in domestic competition. He also received 1 yellow cards and 0 red cards.

so i packed this gut from a one rare players. at first i thought is that better than my tots haland. definitely his pace is out of this world and his shot is just world class.knowing ea he will be 82 rated next season so any one with coins i recommend you buy this legend while he is still the goat. but anyways back to the point i swapped him in my squad for haaland and well lets just say he carried me to elite 2 first time in elite and id gone 25-4 so scored an own goal and left my in my last match but this guy is truly the goat.

he is one of the best strikers i have every played with. The formation i played with was a 451 with two cams. I managed to get enough coins to put reus and havertz in those positions, who were also brilliant. However, depsite having those mad players, werner still overshadowed both of them by a mile. His pace is unreal, pulls away from defenders at a phenomenal speed. shooting is mad. Press b and it goes in, no matter where you are. i played 65 games with him, and 30 of those were fut champs. he bagged an incredible 93 goals. However, his long shots are a little poor, ea could have made his long shots higher then 84. Definately worth the coins, hes a must for squads

maybe a little to easy to push over

First I have to say that my English isn't so good and this is my first review.

I packed him untrade from the Deluxe pack. He is so good ingame. His sprints are so nice and the finishing is soo good.

and much more can't write all.

Having played with his POTM2 card since its release date, I was very anxious to get my hands on this new shiny version of Werner. My expectations might've been the biggest liability on this card. His POTM2 card was an absolute cheat code at a stage in the game where 90+ defenders were few and far between. There was just no stopping that card when he decided that he was gonna get into that box. With the release of this card you would expect this to amplified, but in truth, the OP defenders that also come with the release of TOTS have the impact that this card makes, toned down. Don't get me wrong, he's still fast and he reacts like a bullet to balls in behind. But what I increasingly experience now is that defenders are hauling him in from behind and pushing him off the ball a bit too easily. If you have better ability than me (I'm a Gold 2 Fut Champs Player) to get your strikers into space inside the box, I have no hesitation that you will score bucket loads with this card.

Does not miss when put into space in front of goal

Still has that thing where he loses the ball, but he fights to death to get it back again

Feels a little more clunky than his POTM2 card

Gets removed off the ball very easily

Use him up top in a 4-2-3-1 hes great at hoding up the play and getting in behind no tactics used on him. Werner=Beast

Timo Werners TOTSSF is an absolute god. As any other player, certain things you do work for the card but this man has the best combination of pace, physical, shooting and dribbling. He makes his own runs to perfect positions and can beat the best goalkeepers with his shot power. Ive always struggled against Ter Stegen and especially his TOTSSF. But now theres no worry in the world thanks to this man.

Hello guys...I played him 15 matches and...what should i tell you...this guy is trash! The composure and the 3 Skills makes him shit for me...98 shooting is absolutly fake! He is fast but thats the only positive aspect...

So guys, I had 9 untradeable Bundesliga rares, so I thought why not do 1 Upgrade player pack.

And that worked out quite well, I got this guy in the first (that ofcause made me do more, which I got nothing in)

I fit this guy into my team, it wasnt that hard, with boateng and Schultz in the squad. He was play Right Striker, next to 98 Sadio Mané.

He was on "get in behind" so he could get in between the 2 Centimeters of space, there is between all thes Drop back 1 Dept players, you face 9/10 matches.

Honestly I was quite disappointed, his finishing was good, his passing was good, but first touch, and general drible was really not up to my expectations.

He might fit someone who play drop back, and just run, run, run with the attackers and hope for a mistake, but for me, he was not good, he is at the bench now, with Visca (a 72.000 Coins player) starting over him.

streng (he is not super weak, but he gets bullied to easy)

Packed him tradable from the Al Wedha league sbc pack and at first i was hyped. I hopped into a game with him on full chem and he was dreadful. Partnered up top with base weghorst he had 8 shots, 9 of which hit the post. I discarded him immediatwly after for quick coins. DO NOT BUY.