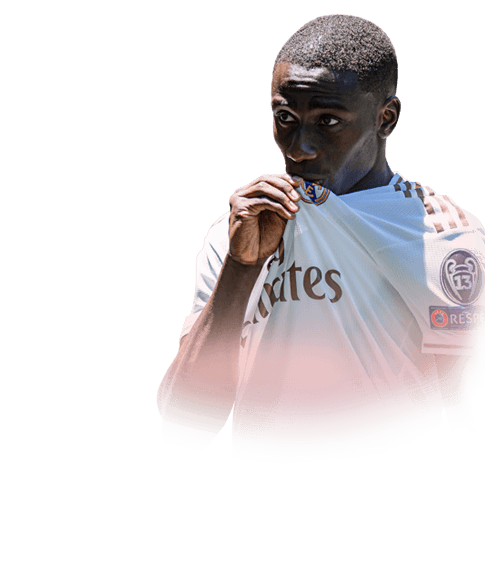 Many players might be aking this question about 93 Mendy: Is it worth that may hours of my life and so many hours of dull, brain-numbing and ridiculously annoying grind just to get a puny LB? Doesn't his 85 rated version do the same job just as well? The answer to both of the questions is a big NO . Because this card is not supposed to be a left back in your 4-5-1. This card is designed to be the prefect workhorse. A man who can do just about everything on the pitch. Score a hat-trick, supply threaded through balls to attackers, make VVD and FB Boateng look like Phil Jones and David Luiz with a strenght and ball control nerf. He does that perfectly, and does so much more. Whenever your defenders f*ck up, he will be there to elegantly take the ball off Neymar, triple elastico past their Kante, and make MATS look like a deluded fool. When Ryan Kent skims past your defense in the 96th minute, he will pseudo rugby-tackle him, snatch the ball off him, and start the counter-attack without breaking even a single drop of sweat. But before we will get into the proper 'review', I'll talk about the biggest obstacle to get this god amongst mortals - the grind.

The grind IMO was more tedious and lengthy than annoying. In fact, there will be some moments in this grind that will probably make you chuckle and make you think: WTF! How's he done that. I would estimate that this grind would take about 50-60 games to accomplish. If you have the 89 and are looking to get the 93, I would advise you to slap a deadeye on him (the chem style that boosts shooting and passing) and put him at CAM or ST to maximise the amount of time that he spends on the ball. Call me crazy, but towards the end, I actually enjoyedey the grind as it allowed me to test out Mendy's body type, how he feels like in-game and whether he is prolific enough as a player. So, my conclusion is: DO NOT FEAR THE GRIND. It's not even that bad. Miss 1 shitty WL and u get 3 good fodder cards and 1 godly card.

The speed on this card is absolutely ridiculous ,as expected. Feels like he has both acceleration and sprint speed maxed out. Unlike his 89 version, which IMO felt quite clunky, this card is one of the smoothest I have ever used in this fifa. This pace allows him to run all around the pitch and be in the right place at the right time, which is really important if you use/want to use this card in the way I do- to be the dominant force on the wings, and in the heat of the battle generally.

99 Attacking Positioning really shows. Whenever you need someone to finish your attacks, he will be there to bury it. 94 Finishing, 97 Shot Power and 86 Long Shots make him the (almost) perfect weapon in front of goal. The only real reason I didn't give Mendy a 10/10 was because of the lack of Finesse Shot/Outside Foot Shot, but that is just a personal preference. This is a man who you can rely upon to finish your opportunities and the fact that he has more goals than game even though he is not the main goalscorer in my team really shows his profeciency in front of goal. 5*WF make him really unpredictable and that adds an extre adge to his shooting prowess.

99 Vision, 96 Crossing, 99 Short Passing, 93 Long Passing and 93 Curve. These stats say it all. Whatever you expect him to be able to do, he will do it and so much more. He specialises in cheeky one-twos, crosses from one side of the pitch to the other, and driven crosses that are almost always aimed with the precision of a guided missile. A possesion whore's absolute dream. (Just don't even think of taking free kicks with him :) )

I was actually tempted to give him an 11/10 for his dribbling. I did not expect him to feel so good on the ball, especially after the 89, who IMO was a great disapointment in terms of how smooth he felt on the ball. 94 Agility and 91 Balance both feel like 99. 96 Reactions means that he reacts to what is in front of him very quickly, and acts accordingly. Every other stat feels maxed out as well. Elasticos all day long with this lad. 5* SM is also very useful and fun to use.

But what happens if you do lose the ball because VVD steamrolled through him. He just takes it back as if nothing happened. 93 Standing Tackle and 92 Sliding Tackle allows him to easily snatch the ball off even the most slippery opponent. This combined with 90 Interceptions,87 Def. Awareness and 82 Heading Accuracy make him into a elite defender, always to be contended with.

99 Stamina allows him to run around all day. 90+ stats in every Physical category makes him into an absolute unit.

Every player has his flaws, so I'm going to list Mendy's: Free kicks and (maybe) volleys. That's it.

Even though the grind isn't hell as everybody makes it out to be, it's still very time consuming

89 Mendy: IMO 89 Mendy is quite clunky. Will definately do the job as a LB, but just is a tier below the 93 version.

TLDR: He's worth the grind. Trust me.

P.S: These stats include 2 Friendly games.

He is an objective

So as soon as i saw this card come out i knew i had to do him and it was worth it. He is rapid fast, he catches up to any winger and bodies them because he's so strong.

Strength - he bodies any winger

Defending - he doesn't let anybody get past him, his stand tackles are incredible, he wins every tackle

Weakfoot - he has 5* WF which comes in clutch