This card is Insane!!!

I was bored one day so i just randomly looked at the different kind of special cards there were in the prem when i came across this guy. At first i thought his card was quite average, decent defending, decent physical not the best pace but i thought why not, trying him out couldn't hurt. I bought him for 15K and chucked him straight in my team at CB next to Laporte. From the first game i noticed that there was something special about this card, his defending was insane it seemed like no one could beat him one on one and when they tried to run past him he would just push them off the ball with his 86 strength (which felt like 90) no matter who they were, another thing i noticed was how no one was able to beat him in the air either, he stands at 6'4 and has 87 jumping it was basically impossible for someone to out jump this guy which made it quite easy defending corners and crosses. His passing is not the best but its still quite decent and i never really have problems playing it out the back with him. The only problem i had with this guy was his pace but that can be made a little better with a shadow card.

I would 100% recommend this card to anyone who's looking for a good cheap CB, i have made him a permanent member of my team now and haven't looked back since, don't get me wrong this card is no VVD but its close. 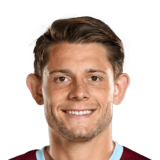