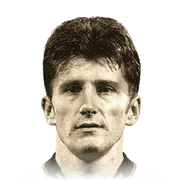 Davor Suker is going to be an icon I will remember for a long time, I have tried all variants of this card and can have the final say that this card is completely different in terms of feel compared to the 87 and 85 rated cards. Davor suker shows that he is a complete forward who is able to shoot and dribble. Though I prefer my players to be 5* skills davor Sukers dribbling makes up for it however his agility and balance are low for my likings. I have used hunter on him and he is a complete monster on the field, he is able to head the ball very well as he is 6'0 tall with decent jumping .that being said if you are looking for a very reliable striker I believe that Davor Suker is the best option by far

Shooting in and around the box

Dribbling feels very responsive even tho the agility is only 87

I have used this guy for over 150 games now and have to say that he is a beast. For the price, there are very few, if any, icons that you could get that are better. This guy is ruthless on his left foot and with a 4* weak foot is good on his right as well. His height had me worried about whether he would be clunky in game or not, luckily his agility and balance are quite good and so I have had no problems with the cards responsiveness in game. If you're looking for an attacking option and don't want to spend a ridiculous amount of coins, I highly encourage you to give this guy a go.

Dribbling is better than expected.

Passing is pretty good for a ST as well.

Despite him being relatively tall, he is not that strong and not that good at headers. This is the only real negative I could think of.

This beast is hands down the best striker I have ever used in FIFA. His pace may not be the highest, but holy shit is his shooting unstoppable. When Suker has the ball, I have to use less shot power than normal because he absolutely crushes the ball. His left foot doesn't miss, it is insane. His high physicality and size make him hard to force off the ball, which coupled with his very good dribbling for a striker, makes it very hard to stop him. He has high passing for a striker and can be relied upon to link up with players and not fluff a pass.

-Excellent combination of pace and power

-Great passing for a ST

-Plain fun to use, can always rely on Suker to bag one

-Not the fastest striker in the game

-4* weak foot can be a liability on harder shots

-Can't use two of him up top