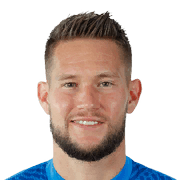 This man is a hidden gem.

I had Ederson in goal with 7 laliga players in my squad including the centerbacks (Militao and Carlos). I really wanted to complete the Koundé objective but you needed 8 laliga players to do it.

I came to the conclusion that I'd just replace Ederson with a random ass laliga goalie. Vaclik was my highest rated laliga keeper so I slapped him in my team.

Boy oh boy, imagine if I had never done that, I wouldn't have discovered this man!!!

I played 15 games with him for the Koundé objective and he surprised the hell out of me, this man saved my ass so many times.

Goalkeepers tend to be quite shit this year, but Vaclik makes saves like the FIFA 17 Jack Butland used to do. He just does what a keeper is supposed to do. He saves the shots he needs to save plus he makes a few clutch saves as well.

Now this doesn't mean he'll save a top bin finesse from Mbappé, but it does mean he saves some good shots across goal with a nice dive, and as I said, some clutch close range shots with good reflexes.

Overall I would just say that he is very reliable, something that not many keepers are this year.

A big disclaimer to the FIFA community though!! This review probably made you excited to try him. But it's still FIFA and it's still EA Sports so he might be absolute dogshit for you. This is purely a personal experience and he might not be good for you. Do try him though, he's 800 bloody coins.

MY OH MY! THIS VACLK MIGHT SEEM A VERY STANDARD GUY BUT DAMN!!!! WHAT A GOD BETWEEN THE POSTS! HE HAS THE LINKS TO GREAT CENTER BACKS LIKE DIEGO CARLOS AND KOUNDE AS WELL! GO BUY HIM NOW

* Ver fast and agile between the two posts

* Very quick picking up the ball already inside the net

Honestly,i can't find any! I mean, this guy, is worth every single dolla you are paying! Sell your ter stegen, sell your areola, sell your schmeichel, VLACIK IS THE GUY

So i basically only let him playing because i needed a green link to Kounde and didn't had much expectation or more like zero expectation on him. But he surprised me and now i am not thinking of replacing him. He is very good at saving chip shots and in 1 on 1 situations. He saving some shots you thought the are already in. Another good thing is that he catches often crosses. Most of my other Goalkeeper were only boxing them away directly away to the opponent ( yeah im talking about you Gulasci). He is not the Best at long shoots but it dosen't really matter in this Meta. Overall a great and cheap Keeper but don't expect too crazy things from him. But for that price he is very solid

one on one Situations

He is not Peter Gulasci

He is not Nick Pope