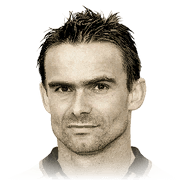 -
Sub out
Upcoming Matches
P. Chemistry
Squad chemistry
ST
79
RW
85
LW
85
CF
84
RF
84
LF
84
CAM
83
CM
79
RM
84
LM
84
CDM
66
CB
56
LB
67
LWB
71
RB
67
RWB
71
Reset
Basic
Sniper
Finisher
Deadeye
Marksman
Hawk
Artist
Architect
Powerhouse
Maestro
Engine
Sentinel
Guardian
Gladiator
Backbone
Anchor
Hunter
Catalyst
Shadow
Comments
Reviews
0
/600
Click here to verify your account in order to comment Update my avatar Dos and don'ts
Top Rated
New
Controversial
Show comments
Top Reviews
Only logged in users can submit a review
A review must be written in English
At least 200 characters are required.
Compare this player to other similar players you have used(optional).
If you import your club to FUTBIN or send us an image with the player data(fill the form below) your review will be marked as verified.
Include what you liked about the player in the pros area and what you disliked about the player in the cons area.
Your review will be manually checked during the next 24 hours.
Chem Style Used
Formations
Position
Rate Player Base Stats (1-10)
Pace
5
Shooting
5
Passing
5
Dribbling
5
Defending
5
Physicality
5
Most Used In:
Submit Review

Are you guys sleeping on Overmars? Is he boring? Are there too many LWs? Trust me, give him a try, he's better than any "cheap" meta players such as Dembele, Rashford etc. This man is just different. His animations are insane and he glitches through everyone pretty much. Tried him as striker, and his finishing is way above what it says on the card. For around 200-250k he's a bargain.

When I opened my base icon pack I was really annoyed to see Overmars, however, I decided I should try him before he sits in my reserves forever. I played him up top in a 442 alongside Joao Felix POTM and these two were great all weekend long and were able to secure me gold 3 in only 16 games after forgetting I was playing champs this weekend. I realised I was mistaken about hating this card after 3 games where he scored 7 goals and got 3 assists.

I was pleasantly surprised when I saw my central midfielders sending a ball in behind and him being able to get away from Joe Gomez, and Jules Kounde. Because of his five star weak foot, I was able to shoot with either foot and expect it to go in. Although I had low expectations for him they began to rise as he scored two hattricks in his first two games.

There were times where I missed four star skills and I was unable to do a la croqueta and if he had this he would be very good.

Missed some things I would expect him to score.