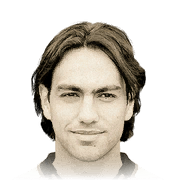 So, this is my first review ever, but honestly I just had to.

I played him in 10 FUT Rivals games, as FUT Champions had already finished. I slaped a SHADOW on him not only for (obviously) pace, but to also make him a concrete wall aggainst every possible oppenent.

I was making a new team from scratch, and when decided that I would use Jason Denayer (84) by really loving is stats. BUT i just couldn't manage to put him a full chemistry, SO... what better than an ICON. My search started by trying to conciliate Price vs Quality (Pace/Defense/Physic), no sorprise to me when I ran into this man. One of the cheappest and the base 71 Pace did not scared me at all, as I knew SHADOW or CATALYST would solve the "problem".

Believe me when I say that this guy manages to catch up and run side by side with the players that make FUT hard to handle at times. For the first time since the start of FIFA 21 I was outpaced every single time by opponent's attacking players. Nesta just can't be outpaced, some of the players I played aggainst were: Cristiano Ronaldo, Salah, Mané, Dembelé, Aubameyang, Portu, and others, NO ONE passed this man while running, even in the final minutes of the game.

Physically and in defence believe me, this man is nothing but concrete, brick and steel. Once you manage to stick to you opponent is over for them. Slide tackles, standing tackles and just sticking to the opponent's players, will just spit them away like chewed gum. Maybe is the SHADOW but with almost all defending stats at 99, this man just feels like a monster.

I really have to say it, you won't feel it running like he his beeing chased by lions, but once you see that your opponents won't bee able to escape from him, you will understand.

Can't really give him more, he is a CB, only comes up on corners, and that's not my strong spot, although we can jump really high, and defensively all balls are his.

Maybe the most "MEH" part of this card, don't try to make a lot of first touch passes cause most of them will go slow. But, if you manage to keep calm in defense he will make 9 out of 10 of those passes.

Once again, he his a defender, don't try to drible with him. He is agile enough to rotate of the attackers and keep out of the pressure, but don't push it.

This is the thing. This man will break the attackers if they dare to come near him. Will put his foot at the right time in the right place and stick to the ball. Put you body on the way, and your oppent will think his controler battery just run out, has he will be stuck on Nesta's back like a clam.

Same as Defengind.... This man could tope Adebayo Akinfenwa even if he was running at full speed and had another 50 pound of muscle. AND, this man will run the entire game, his resistance won't run out, never seen his indicator unless totally full.

Now, we get into the more subjective ratings:

No need to explain this, ICON.

The only reason of this 9, is because I know not all players will be able to have 400/450k coins "stuck" on only one player. But is one of the cheapest CB ICONS (with the enough ammount of pace) and will definitely change your entire defence.

Literally the only thing bringing him down is his passing, although if you could set him up with a player like Denayer, your defence will be completed and will save your net in most of the games in WL.

Passing (if you are carefull this will not be a con)