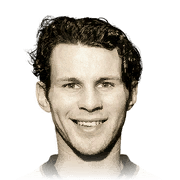 After missing out on Klaiber to do a base or mid icon sbc, I was obviously unimpressed when this man walked out. However at lm he is decent. He feels fast with a hunter, his dribbling is smooth and his passing is very good.

. Wins the ball a lot for some reason

. Lack of skills and weak foot can make him predictable

Excellent player. I used him for my whole champs run this weekend and he was an excellent addition. I played him as a RW in a 4-3-3(4) and cutting in on his left foot was deadly. After 25 games he had 23 goals and 10 assists. It felt using Robben in Fifa 14. Incredible pace, dribbling, and good passing. His 2 star weak foot was not a problem at all, except for a couple errant volleys. The 3 star skills is a big let down, but his dribbling and ball control helped make up for it a ton. One of the few RWs I have been able to have success with consistently when coming up against Mendy, Varane, Gomez, etc. All games were played with him on 6 chem.