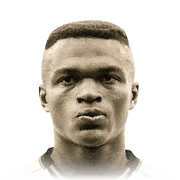 Since i got nothing during the toty, i put all of my players to do mid icon sbc included keane and ballack. When i opened it i saw France with cdm, i thought im going to get petit or makelele. Fortunately, i got desailly. I saw the price and i knew that i had a big win. However i put him in the cb position with 7 chem but this didint affect him, he still plays well. I was using Van dijk before desailly and he is better than van dijk so much, a better body type, a better jumping, a better defense. In conclude, he is absolute beast for me.(Sorry, my English is bad)

not good at long pass

First of all, I used this Marcel Desailly as a CB in a 41212 alongside Virgil Van Dijk's normal gold card who is a very meta and popular centreback that I can easily compare him to. I've used this centre-back partnership for around 120 games and both have been very solid. The majority of these 127 games I performed in FUT Champions or division rivals,(I was division 3 for most of the time using Marcel, but in recent games I've been at Division 2).In weekend league I usually get around Gold 3 to Gold 2 depending on how I feel.This is just to give a bit of context for my review, so lets get into the pro's and cons of the card.

First of all, the good bits.

Defending-Let's get onto the main thing, his defensive stats. He is a brick-wall and tackles properly. He is always in the correct positions and is able to back pocket many good and meta attackers, these include Record Breaker Mbappe, Eusebio and a few Ronaldo's in the mi he is able to marshal them with impecable blocks which compared to VVD are very good. They're both very good at blocking due to their ridiculous defensive awareness, however, Virgil Van Dijk may edge him out here due tot he fact his Defensive awareness is higher but to be honest, the 2 stat difference with the shadow on them both isn't noticable and both feel like a 2nd goalkeeper with their impossible blocks .Alongside this, his auto-tackling is extremely good making life alot easier and making him overall more meta.

Physicality-This is where Marcel shines over VVD, especialy in tackles. The base stats tell us VVD has higher strengrth which is very minimal and allows him to collect the ball and not be dispossesed easily by smaller attackers, this is where he can also muscle off attackers of the ball. This strength difference is almost unoticable, with the 2 being very string. However, Marcel Desailly's aggression stat is very high and is much more noticable compared to VVD, basically it makes Marcel's tackling a lot more aggressive and he will win the ball in more scenario than VVD may. His stamina is very noticable in comparison to VVD, where VVD will be gassed by half time, Marcel will keep on running and being quick. In this department he trumps VVD due to his much higher physical stats and higher aggression which is surpisingly very noticable in-game and how he deals with attackers. In addition to what I said, the higher physical and strength stats make sure he doesn't 'sponge' tackle where defenders with lower physical stats may do so.

Pace- His pace is another area where VVD is smoked (quite literally). He is extremely quick, having 93 pace when a shadow is applied, this makes Marcel one of the quickest defenders in the game. this Desailly card has more pace than Varane's normal card while having a lot more acceleration than the sweat beas called Varan. In comparison to VVD, there isn't one. Van Dijk's incredible defending abilities are able to combat his pace defficency but when a 1-on-1 is on, VVD will lose it if the runner is able to get around him as VVD cannot make the ground up and pressure the attacker into going wide or away from the goal like defenders like Klaiber and varane can cause people to do so, meanwhile Desailly can do this, like the other meta defenders as said beforehand. This makes his pace near perfect with it coming in at a solid 4.5/5 due to the fact the pace isn't 99 which means he can still be out-paced but by very few attackers.

Other bits- Some other stats which are phenominal include his composure, this makes him ice cold at the back, passing is decent and his heading is good if he gets up to head it.

The bad bits of this card are very minimal but there is one, huge, glaring issue with this card.

Dribbling- Let's address the elephant in the room, is he clunky? Is his agility and balance noticable? Can he move without taking 20 years? To be honest, yes he is clunky, which is why I would never advise this card to play at CDM even if this card is a CDM, due to the fact that he is far too clunky and his passing is at that level. However, the lack of dribbling is managable due to him playing CB and his pace automatically making up for the lack of ball control etc, this will allow him to seem quick when chasing down an attacker but on the ball he will feel like a 747 jet. However, his composure stats make up for the lack of dribbling stats as he is still able to play out the back and keep the ball when under pressure. In comparison to VVD, the dribbling is very similar except VVD doesn't have 93 pace.

Conclusion- He is a very, very good CB on this game and fits the meta perfectly as he is fast, strong and an absolute brick-wall with his blocks and his auto-tackling ability which only a few CB's have like VVD. He is a solid 9/10 CB due to his insane pace and insane defending. He is a must buy if you want as mid-field card to play CB but if you want to do ball rolls and play with your CB's in an attacking manor he may not be the one you like but apart from that, get him now. (Until his Moments Card comes out lol)