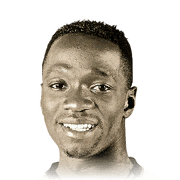 I Picked this guy up for a review and for 400k this guy is one of the best budget icons around! His stats dont look to impressive but as you use this card you start to realise why it is so good. Hes such a balanced card and the medium/medium workrates make him perfect for sitting in the middle of the pitch breaking up play and carrying the ball forwards. His 3 Star Weak Foot and 3 star Skill moves combination is not really too much of an issue however sometimes his passing with his left foot can be a bit wayward. This guy feels so quick his 88 acceleration and 85 sprint speed are so important in the middle to track back and also latch onto loose balls. Now the shooting is not the best but its not terrible as he got 2 goals and 3 assist's in 8 games however finishing is a little inconsistent on the right foot and shooting on the left foot is a complete no go. The passing on this guy is brilliant the 86 short pass and 79 long passing combined with his 84 vision just makes his passing fell so consistent. But the thing that stood out to me about this card was this guys dribbling, hes crazy on the ball. This is because his dribbling stats are so high with 88 agility 86 balance and 84 ball control meaning hes so good in tight spaces and the left stick dribbling with this guy is so vital as to why this card is good. Now the defending is pretty good especially his interceptions with that high pace and high agility making it so easy to position him to intercept the ball. The only problem i have is that his stand tackle and slide tackle can feel a little weak but can be fixed with an Anchor or a Shadow chemistry style. The physical for such a small guy really impressed me. The stamina was solid he could go box to box for the full 90 minutes without tiring and the aggression allows him to fight and keep hold of the ball. Overall he is one of the best budget icons that you can currently pick up.

so I got makelele from my base icon from swaps. I have to say at first I was very disappointed. I didn't know how to use him I figured out a system where I could fit him in however. I play him cdm next to Tello in game. In my opinion he is a very effective cdm. I put a shadow on him so he is insanely fast and his defending gets a boost. He is very agile which means he can turn quickly and is very effective when you are being countered. His defending is definitely done dirty by the stats. going forward he is very solid amazing dribbling and great passing its hard to get the ball off him. One of the only bad things is the finishing which isn't the best.

shooting and heading but he's small so can't expect to much in the air.

I was very lucky to get this really very good player in my basic icon pack. I put it in the game as my cdm in the 4-2-2-2.

He was very fast and could run after any player no matter how fast he was. Catching or defending balls in general is no problem for him. In my opinion he is better than Kante, which I played before him. His passes were completely brilliant and he has made many assists. His shooting stats are a complete lie, if you let him forward in the attack, he'll score a lot of goals even if his stats aren't the best. He's already scored a couple of goals for me. His stamina is easily enough for a whole game. He is small and very dribble strong, which means that he often dances defender.

In summary, Makélélé is my best cdm so far and I will definitely keep it until the end of the year. He is definetly worth every single penny.

-He is small, so winning Headers is difficult for that guy