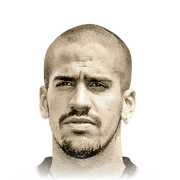 Not the fastest midfielder but very suprising, if you slap a shadow on him he's quick enough for tracking back when the opponent is building up their attack.

He's a decent CM, I haven't used him as a CDM due to the squad I use. I pair him as a RCM on the midfield with Storyline Duncan (CDM), and FUT Birthday Sanches (LCM).

I also haven't used him as a CAM but I heard quite the positive reviews w/ a hunter.

I can't really compare him to players I have used besides Mid Icon Essien perhaps, pace is quite the same but Prime Veron has more to offer attacking wise. Also if you are a Inter fan like me it's fun to use him, he may not be exactly 'meta' but very decent for the price.

Try him out if you need a Argentinian link on the midfield, you may not like him but you need to know how to play with him but then again it's all player based that's why I suggest to try him out.

Very aggressive (perfect for my playstyle)

Has the composure and ball control to keep the ball.

The player for long distance freekicks.

A player that comes in handy during a PK shootout.

Great longshot taker, very powerful shots from outside the box.

Decent strength and good finishing for a CM.

Low balance, not too bad considering CR7 and Henry got lower balance.

Mediocre pace for a midfielder.