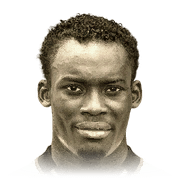 I was lucky enough to pack Essien in a baby iconpack. I play him next to Kante as a CDM in 4-2-3-1 and he gives me flashbacks to Kante TOTY from FUT 19/20!

He is fast, agile and (in contrast to Kante) also Strong. The only bad thing that isnt perfect is obviously his shooting and sometimes his passes. His stamina is also good enough for a cdm.

I packed this card out of the 8 token Icon Swaps Baby Icon Pack (what a name lol). Big W, I thought. But no, he is a giant W. Holy. Moly. I actually dont know what to say, like, hes the best CDM I've ever used (Im a RTG player). his pace just feels really good, his shooting is ok (he scores when he has to but I play him on stay back so he is attacking 1 every 20 games), his passes are ok too but they couldve been better. his dribbling feels really good for a rock like him and together with his rather short height he feels quite agile. now we come to the best part. defense and physical. his defending is outta this world, he has a really strong body and can run up and down for the entire game. the value for the money is definitly there, although keep in mind hes only that expensive cause hes an icon and links so well, not entirely because of his stats.