LUIS SUáREZ - ONES TO WATCH 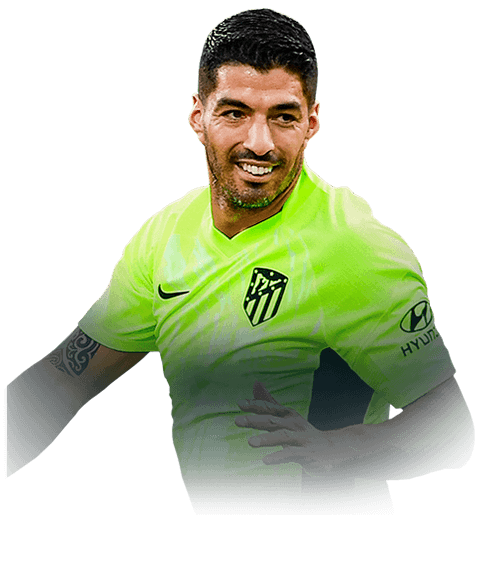 I'm sitting here writing a Suarez Review the first 2 weeks into a very pacey Fifa and I have to say I'm genuinely surprised but Suarez is 10/10 in a 2 striker formation.

I became frustrated with using a 443 and wingers and decided to form a 442 with offsetting striker qualities to get the best of the formation. I Utilize Suarez as a Right Striker under the instructions of false 9, meaning he will turn his back to opposition goal and come to get the ball in spaces between the defenders and midfielders. He's so so so good at this. I was impressed with his ability to hold up play, his touch is great, his turning ability is crazy and he can play a mean dinked pass to a winger or the faster partner striker running in behind. His shooting is unmatched. Finesse goals and general finishing are OP. He slams the ball into the net like its a slam dunk.

Having only played 8 games in Div Rivals (div3) with him I can say he will be in my team for a long time. 12g and 16a in 8 games tells the story of the impact he has had. 442 is the perfect way to utilize suarez and his creative ability. I love what he brings to the team and I'm thoroughly impressed he can have such an impact in a pacey and agile ridden fifa.

Keeping in mind Suarez already has an inform his OTW is incredible value at 150k(I initially saw an investment) he will of course get another inform or two playing for Atletico. Even now he feels like a 150k approved player in my team.

Not rapidly quick, but play to his strengths and you wont notice.

Im an avid Luis Suarez fan so was always going to purchase his OTW. First trilled him in a 4-1-2-1-2 formation up front paired with Eden Hazard. Suarez was thriving scoring at least a goal a games, but he picked up at least 3 assists per game as Hazard's pairing striker. I then trialled him at CAM (after completing Inaki's rule breakers SBC, and Suarez turned into a monster. Since playing CAM (only 4 games), has scored a hat-trick in each and assisted every other goal the squad has scored. He is everywhere on the pitch in attack and defence and just pops up with amazing plays all game.

His shooting ability he can score from anywhere within the box. I haven't taken many long shots in this FIFA so I can't vouch for whether Suarez can score long shots.

I have been awarded 5 free kicks on the edge of the box this FIFA, Suarez has taken 3 of them and not disappointed, he has not missed a free kick (the other two free kicks were with different squads).

He is a bit slow, but if you put Hunter on him it improves his pace a fair bit. But use him as a Striker as the target man, or false nine

Or put him as a CAM and he will not disappoint.

so this might sound a bit strange, but i use him as a cam with an engine, and let me tell you this guy is an insane cam. his passing is on point and his long distant shooting is incredible. I saw the Moussa Dembele Sbc and wanted to make a squad around him. thought Dembele was going to be the star but Suarez is stealing the show. just as good as he is in real life voor atletico. As a cam you dont really need the pace, but dont get mislead by the stats he is fast enough! his agility and dribbling is really good, especially with the L1 combination (ps 4). his weakfoot is also really nice and he finishes everything in the box.