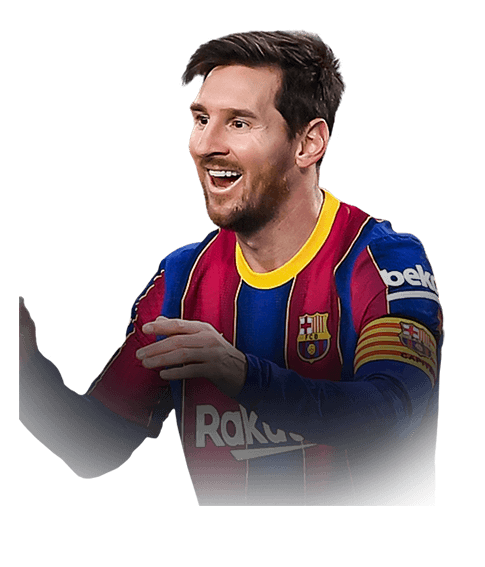 His real-life stats are currently 4 goals and 7 assists in 8 matches in domestic competition. He also received 0 yellow cards and 0 red cards.

First off: I really love Messi in real life, thats the main reason I bought this card. I already had his normal card and as soon as I saw his Inform I knew I had to get him. I played him as right striker next to Joao Felix (sick card btw) in the 4-4-2. I´m an average Division 2/Gold 2 Player.

-Pace: I mean he isn´t the fastest player and probably not what you are searching if you are playing full drop back and counter attack, but as I am playing a very offensive and tiki taka like playstyle the accelaration is far more important for me than the sprint speed. His acceleration being this high you can easily do a fake shot stop and just burst through defenders.

-Shooting: This is the main difference I noticed between the gold and the totw card, his gold card seemed to miss some shots I thought he should score, but this card doesn´t miss. I´ve used Ronaldo, Mbappe and Neymar and imo Messi is better than all of them especially when you consider his finesse shot.

-Passing: As I already mentioned i like to play many passes and I looooves Messi´s passing. He just can´t miss a pass, doesn´t matter if it´s on his right or left

-Dribbling: His dribbling is just cracked. When you hold R1 and do some close dribbling with him you can litterally walk through defenders and he doesn´t seem to lose the ball.

-Weak Foot: Obviously with this year Weak Foot not being that important you would expect him to score with his right, but he nearly feels like he has 5* Weak Foot, because of his crazy shooting and passing.

-Physical: Of course he isn´t strong and won´t score headers, but you don´t need those stats as his crazy dribbling compensates for his lack of strength.

-Stamina: This is the only real problem I had with this card as when you like to use Team Press he is gonna be tired at the 70-80th minute and needs to be subbed out unless you play him at CAM where he can definetely play the full 90min.

-Skills: Of course for a god tier card you´d like him to have 5* skills, but as I already said you can just left stick dribble with him and it´s probably gonna be more effective than skills most of the time.

Price: Of course 1.8mil (time of writing this review but got him for 1.6 earlier on thursday) is a lot to pay for just one card, but I still think he is worth it as he is just crazy good.

Never played with Messi or someone as good as him (except Draft) and got him as a red.

His movement and first touch is out of this world and with a hunter on him pace is not a big problem. He also saved me lots of wins because almost every shot he makes is a goal (other than Trashford...). When i changed Rashford for Mertens it got even way better.

Conclusion: If u dont need pace or 5 star dribbling you should buy him as he makes an excellent cam or even st because he´s one of those guys who can win you important games. But beware that you should try to include his base card first because its much cheaper.

I was lucky enough to pack this guy from my TOTW pack, built a squad around him not expecting way too much as people said he isn't that good, but after using him for a while I can feel free to deny the fact he is bad. Man scores every shot he takes and is impossible to take the ball off, if you don't need 5 star skills or weak foot this is one of the best, if not the best player you can buy. 10

I packed this guy thinking, maybe he is the next Varane. I was wrong. This guy cant jump for his life. He tackles so half-heartedly and gets bullied off the ball. His height isn't really the best either, absolutely useless at corners :( I really wouldn't recommend this guy. He is quite fast though, to be honest.