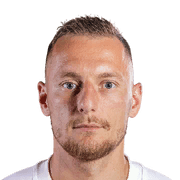 This men can really saves you from tough situations, if you put shadow on him, you'll have 95 pace and a very good defense. I, personaly, prefered him instead of Semedo, since he has more physicality. His 80 strength makes you win 90% of the balls dispute with the wingers (unless the guy uses adama traore)

good physicality for a RB

a combination of a very good balance, a good defense and a good balance (for a cheap player) makes you win 80% of the balls dispute

not a good passing at all (he's a defensive back)

After using all PL RB's except for Walker this guy is the best. Slap a shadow on him and he feels like max pace, the mixture of his stats makes him feel unreal and his defending is very solid too. I got him as a player in my red picks and swapped him in my squad and wow he's nuts. Even if he doesn't fit your team he would make a great super sub like Atal, playing as a CDM since he has good PHY stats too

For the price he is no cons