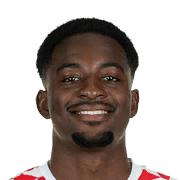 Mateta is a very good striker in most situations but he is very incapable of certain things. He's strength is insane and I can remember him holding back Icon Moments Puyol (94 Strength), Toty Van Dijk (99 Strength) and Icon Moments Campbell (98 Strength). Mateta's shooting is also a big plus although he's weak foot is lacking. He makes decent runs through the defence and is very effective in build up play. The best angle to shoot with Mateta at is usually across goal from the right side of the net, once he is in a good position he is pretty much unstoppable. With a hawk, he has 93 shot power and 90 finishing which can really see whhile using him. A downside to Mateta's game is his passing, he often fails to pull of through balls and is terrible at passing off balance, however he makes up the this with being able to win the ball high up the field. Also, he has surprisingly good pace for being 6"4 and this works very well with his strength while running through on goal. I would say Mateta runs out of stamina at around the 75' mark which is a big problem for him because he is pretty much useless without stamina.

Winning back Possession high up the Field