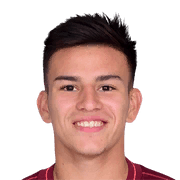 3
Sub out
Upcoming Matches
P. Chemistry
Squad chemistry
ST
73
RW
78
LW
78
CF
75
RF
75
LF
75
CAM
75
CM
73
RM
78
LM
78
CDM
76
CB
74
LB
80
LWB
81
RB
80
RWB
81
Reset
Basic
Sniper
Finisher
Deadeye
Marksman
Hawk
Artist
Architect
Powerhouse
Maestro
Engine
Sentinel
Guardian
Gladiator
Backbone
Anchor
Hunter
Catalyst
Shadow
Comments
Reviews
0
/600
Update my avatar Dos and don'ts
Top Rated
New
Controversial
Show comments
Top Reviews
Only logged in users can submit a review
A review must be written in English
At least 200 characters are required.
Compare this player to other similar players you have used(optional).
If you import your club to FUTBIN or send us an image with the player data(fill the form below) your review will be marked as verified.
Include what you liked about the player in the pros area and what you disliked about the player in the cons area.
Your review will be manually checked during the next 24 hours.
Chem Style Used
Formations
Position
Rate Player Base Stats (1-10)
Pace
5
Shooting
5
Passing
5
Dribbling
5
Defending
5
Physicality
5
Most Used In:
Submit Review

I got this card untradeable and I thought it was a normal conmebol card. When I realised it was a Motm and he has 96 pace, I logged in on futbin to try and put this card in my squad. I play him behing acosta, that creates a perfect link between them. I played him on futchamps 20 games more or less and some more matches on division rivals. (rank 4)

It's going to be my left back for a lot of matches. Personally I think it's better than normal mendy or normal davies but it might be an unpopular oppinion. I recommend trying him for a few matches. The price is 10 k but you can quick sell him for 9,9 k I think so you can try it for sure!

The pace of this man is unreal, he cathces adama, neymar and ol the speedy attackers without efford.

I personally dont do almost any skill so I dribble with the joysticks and some easy skills that even a 2year old can do. The aggility is unreal and the dribblig is pretty decent , it feels like a 88 dribbler card because of the 98 agility and 96 balance

I play him with shadow and it feels pretty solid, its not maldini but he will do the job.

You can play this card by holding the sprint button the 90 minutes, i will not be tired.

A littel bit weak but he has good balance so he will ot fall, nut he could be move by big stocky strickers.

I personally think that for a lb 3 and 3 is ok , but I know this comunitty always want at least 4 and 4 but believe me its ok.

To start off, I'm a div 2 player and I usually finish elite 3 in WL. Going right into it, Bernabei is prolly the best left-back I've used other than Acuña but I like to play him at CM. Most of you probably have Mendy but compared to Mendy he is much faster and has better dribbling. Defending is good, not amazing, but good. Physical is average for a wing-back (I would say Mendy has better physicals). Passing is fine too, nothing crazy. Bernabei is just so quick, he outruns anyone and if you buy him and decide you don't like him (which you won't) you can quick sell him because he goes for discard price. In that sense, he's basically free. I recommend him if you can fit him into your team in any way or just use him as a sub. Use sentinel.