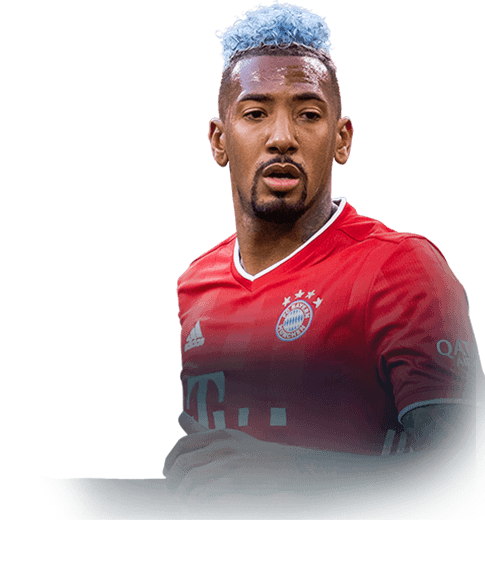 It was a sunny day in June and I was sat inside opening my flashback and I got Boateng. He went on to become my favorite cb of Fifa 2-. This card came out I did his sbc in 10 minutes. He is a beast 6'4 height is crazy and his block and tackle reach is crazy. His pace is good and can catch up well to a fast ST like Ronaldo but his acceleration is not great. He can ping a ball just like his Germany days and the 4 star weak foot is great. His heading can score you goal with the height and jumping. He can turn well and his reactions are great. His defending is end game and the best I have used all year it is just next level.He puts people on the ground and he is aggressive in attempts and will last the whole 90. Get him now don't miss out on this underrated beast.

He seems to get some sort of special card every year. Every year it is OP. I know some of you might say, "Oh, he looks good but Varane is still better cheaper and tradeable" Well, fuck that. No one likes the kid who uses Varane, Mendy, and Joe Gomez. Before this card you might say it is the only way to win but now there are so many more options. One of them being this card. I used him with RTTF Klostermann at the back, another insane card, although very expensive. The pairing between these two is ridiculous, Klostermann with the speed to make up for Boateng's slight lack of pace, (100% needs Shadow) and Boateng, who you literally CANNOT get passed. Not even Ben Kester Lieve Mensen with his slippery, sticky dribbling can get passed this monster. I highly recommend you pick up this card, whether you have lots of fodder from saved up packs, or you pack a TOTY Neuer/ TOTY Kimmich/ TOTY Davies/ TOTY Lewa. There are soooooo many options to link him to.

Definitely not slow but the acceleration does let him down a little bit, however with a fast CB next to him the pairing will work perfectly

Irrelevant for a CB, but his heading accuracy is quite nice.

Brilliant. He can make long balls to anywhere on the pitch just like he did in 2014 World Cup.

Agility and Balance is very good considering the best CBs in the game like Desailly and Varane have very low agility and balance. Composure and Reactions are also very important stats on a CB and they are basically perfect.

No one gets past him.

His strength is unbelievable, makes up for some of his lack of pace.

Insane links to all the new TOTY players

No Blue hair in game

I decided to do this Boateng since I was in need of a CB. I linked him with goretzka and Ter Stegan, with Kounde beside him. He is a really good card. He has the best tackling I have ever seen, and he can catch up to players if he gets going as well. His only problems and his low stamina, and his low acceleration. He also has great passing. If you need a Bundis or German CB, DO HIM. He is brilliant for him price and you can use your fodder as well.

-Great strength and physicals in general

-His stamina is a little low (May be a problem in a 3 back formation, or in extra time)

I am not very good at FIFA I was hard stuck in div 4 for a Iong time. I mainly use a Bundesliga squad I was excited to use him. And let me tell u this he is insane. he is fast, his defensive awareness and positioning are unreal. he is just such a good all-rounded card he can long pass to my cams which i really like. His strength is unreal. All i can say about him is if you have the money do him. He is so fun to use

Stamina(he could last but hes gonna be very tired)

First i had baby petit as a centerback and he was great, but if i compare him to this Boateng than Petit is shit. What. A. Beast. He is insanely strong and his tackles are great, you dont really feel the 73 acceleration because of his 86 sprint speed. He also turns quicker than i thought. For me he is the perfect centerback! I think you have to do this card if you can link him in your team.

Sorry for my shitty English

It was a sunny day in June when got this man out of the flashback pack. He went on to become my favorite cb of fifa 20. This guy came out and I did him in ten seconds. He came in and he was great. If tere is a comp for this guy it is Varane, Kounde and Sol Cambell. He has the best qualities of all three. His pace is good but his acceleration is not the best so don't leave out on a island. His passing is great is even better with the 4 star weak foot. His defending is the best in the game he stops everything, his blocks are great and he is just a wall. His physical is next level he just puts people on the ground. Guys just get this card you will not regret it.

only out for 6 days

Note: The squad I use is after players have been subbed on

Well well, what an absolute beast of a card he has been for me in the games I have used him, alongside Konaté (Who is actually alright) they are a very good wall against most players, his tackle reach is absurd I noticed he was taking the ball away from attackers like it was nothing, his strength is very very good also, barging past people and getting the ball back to other players with ease with his very decent passing, for a 6'4 beast, he actually feels alright on the ball, which surprised me, overall this card is very worth it in my opinion, especially if you have a lot of coins/luck and can link him to players like TOTY Davies or RTTF Alaba, this card can be linked to many good players.

Short amount of time to do the SBC

Wow. What a card. A really great and all round solid card. Reminds me a lot of the card he had in fifa 20 which I also used and enjoyed using.

He's really great and worth the price. One of the best cb's you can get on a budget right now in fifa.

I use him in division 1 and he is such a tank. His strength is simply astonishing and his tackles are as well. His sprint speed also allows me to often catch up with fast players like Mbappe. I also noticed that I was conceding less goals.

He is probably worth doing if you have a Bundesliga defence, cause his SBC price is more than fair.

I did Boateng a week after this SBC came out because i was sceptic building a Bundesliga Team. But i did it with Boateng and Alaba as my cbs. And I need to say WOW!!!!!!! Boateng wins every 1v1 and is fast enough to slide into Mbappe or Neymar ( I did it before i reviewed him). And if you think he is only a beastly defender you arent right! Because he is a very good header player if you have a problem score after corner. And his Shooting is very strong too. He made in 10 Games more Goals than objective Plea. This means a lot

fast as the flash

Better Defence than Kante or VVD

Good positioning after a corner

When you are alone in front of your goal and Mbappe pushes you, you need to shoot the ball away because he cant dribble very well