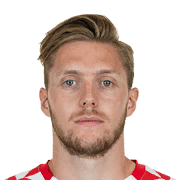 By far one of my favourite GKs used this year. After a lacklustre set of Silver 1 rewards, I randomly chose to bring Muller into my club, I expected him to just be some fodder used later on in the year for a better player, how wrong I was.

This man is incredible and similar to his condition at Freiburg, I didn't recognise his true potential until I sold my main goalkeeper, being Ederson. In net he feels amazing, only shipping 6 goals in the 13 games I've played with him. He can handle short and long range shots with his high reflexes. At 6'3 he may not be the ideal height for a keeper, but he feels like he's a lot taller in game. His positioning feels nowhere near 80, if he sees where the ball is going, he will be in the correct position almost 100% of the time.

Being only 10k and German, he can practically link into most teams, I know that he'll be overlooked because of the rating but this man has solidified himself in my team, even on 7 chemistry.

Comparing him to the Gks I've used previously, those being Alisson, Ederson, Navas, IF Gulachi and Pope, I can hand on heart say he plays better than all of them. He's absolutely amazing.

- Has enough speed to be a Sweeper Keeper

- Can play from the back incredibly well (Even has 2 assists)