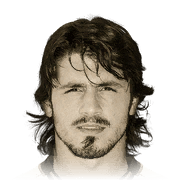 I love Gattuso in real life, used to watch him so I bought him just for that. In game he is actually really good, that mix of defending and stamina and aggression is super good, you definitely notice it in game the way he chases players down and rushes them. I have him as a single CM in a 4-5-1 or a 4-1-3-2 and he does well by himself. Shadow for the extra pace so he can hunt down players faster haha. His other stats are average, shooting is horrible but oh well, surprisingly good at passing even though stats don't say so. I think also, as I notice with Icons, is that they are just a bit better all round for some reason. I considered getting Kante, but I liked this guy too much and went with him. Happy with it

Shooting is by far the worst

I recently packed Gattuso out of the mid-icon pack. My first reaction was disappointment as when I had watched videos in which YouTubers packed him, they had all said he was terrible. This is simply not true. It was the classic case of YouTubers not being satisfied with packing any icon unless it was Pele, Maradona, Zidane, Cruyff etc, and over-exaggerating how bad some of them are. For me Gattuso is actually a pretty decent player.

I wont sugar coat it, he is by no means the best icon in the game, but having played over 50 games with him, my experiences with this card have overall been fairly positive. The main positive with this guy is his absolutely insane defending and physical stats, many or which are in the high 90s. For me, he has worked best as a defensive midfielder and is great for stopping attackers dead on their feet. The amazing interceptions combined with high aggression makes for a really good combo. In the past, I have packed some really awful icons such as Dennis Bergkamp, and my main grievance in particular with players like this is that they don't have any stats that stand out. But with Gattuso, his defending and physical really shines through. Granted, his passing and shooting are awful and pace and dribbling aren't too good either but I have come to like him. If you pack this card, don't listen to the negativity from some FIFA YouTubers about him, he is actually decent.

. Passing can often be inaccurate

. Pace is fairly average (can be alleviated by shadow/other chemistry styles that increase pace)

. Dribbling isn't too great - does have excellent reactions but feels quite clunky