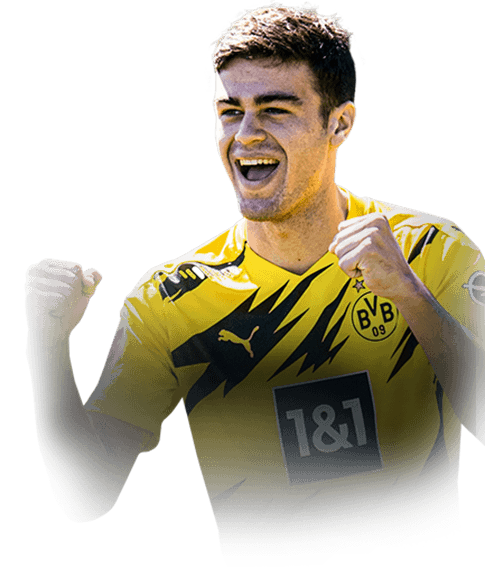 The FUT Future Stars continues to be my favorite promo year in and year out … granted they could have done a slightly better job in their choices, and maybe Team 2 will be stacked, but it isn’t actually about that for me.  There is just something about the thought of a young star breaking into a league or simply just having the world at their fingertips… then turning to Twitter, TikTok etc., and seeing that people are raving about their now very usable card that makes this promo magic.  Some of my favorite FUT cards of all time have come from this promo in the past and I was hoping the same would continue this weekend and then again with the second squad.  It came as no surprise that there was the inclusion of two young American stars given their recent purple patch when it comes to developing talent.  The U.S. has been an assembly line of hyped up potential superstars in the past few years and the future certainly looks bright for the Red, White, and Blue.  This weekend I was hoping that the hype surrounding Dortmund wonderkid, Giovanni Reyna, would translate into a card mimicking the fantastic player that he is sure to become.  If you read my previous review or follow me on Twitter: @IVIaeNine then you will know that Reyna partnered with Wayne Rooney all weekend in the 4-2-3-1 formation… Reyna in the CAM position, with Wazza leading the line.  While I initially went with the HUNTER chemistry style, I eventually switched to MARKSMAN, before returning to HUNTER yet again to finish the review.  Reyna was the towering midfield presence all weekend in the following squad: 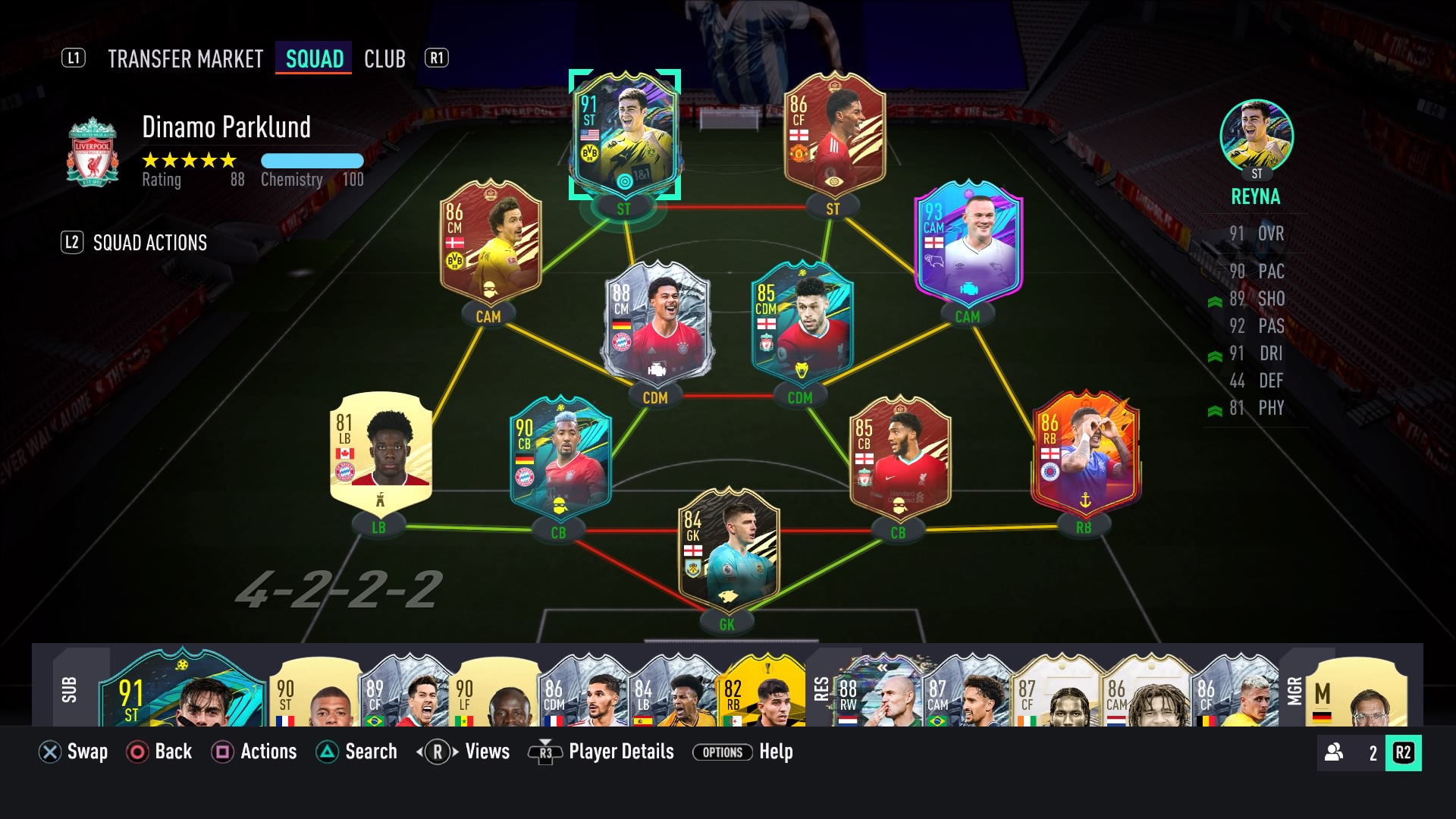 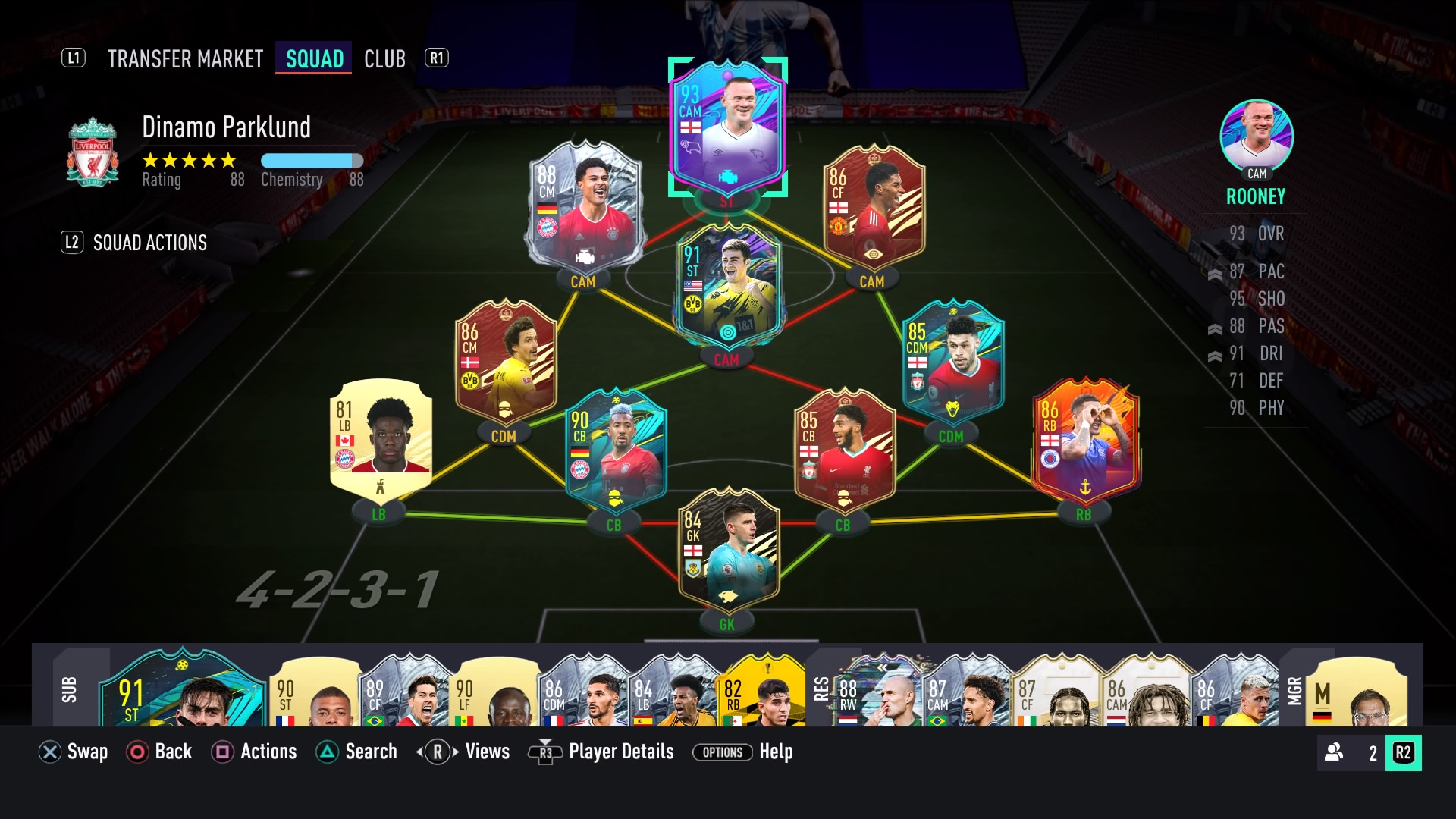 In a word… underwhelming.  Sure, an 8/10 is still a great rating and as some will point out is actually a solid card.  Yes, I agree, the card is certainly solid and can most definitely do a job in your squad.  However, this card is simply not meant for the current post patch gameplay and it honestly felt like the game was fighting Reyna every lumbering step of the way all weekend.  I can already see the flood of comments: “I scored x goals in x games, he is a beast, you just didn’t use him correctly.”  Truthfully, maybe those comments are right, but I can only relay my experience to you as it happened… I refuse to make up experiences based on hype to avoid a bit of criticism.

One area that Reyna certainly wasn’t lacking was in the passing department.  While 8 assists in 20 matches do not scream Prime Modric vision and execution... statistics can be misleading in many cases.  With Reyna, it was clear that his 97 SHORT PASSING & 83 LONG PASSING were on point front the first half of the first match.  Reyna played the ball into feet with fantastic precision all weekend and the weight of his passes over the top was impeccable.  I found that due to Reyna’s slower feel that he was often behind in the play and therefore was more often the “second assist” in a lot of the good moves that I put together.  Being able to hit them with both feet is a fantastic asset as well and made Reyna a key operator in the center of the pitch all weekend.

This card looks massive in-game! What is the point of passing if you can’t hold up the ball to create the opportunities to execute?  With Reyna this was not an issue and nearing the end of the review I actually started playing Reyna as the ST in the 4-2-3-1 late in matches… the press of my opponents proved to be no match for a cleared ball into the American’s vicinity.  In the end, it was the size of this card that proved both pivotal in everything that went right with Reyna all weekend… but (and there always seems to be one) it was also the root of everything I disliked with the card in the end.

Thank the FUT Gods that I was able to use this card for the weekend and then sell with only a minimal loss overnight on Sunday.  The 1.35 million coins that Reyna is valued at as of this writing is starting to look better and better value for what this card brings.  However, I can’t in good conscience recommend this card without warning about the value.  For me, the issues started early as the otherwise impressive dribbling statistics of 99 AGILITY & 95 BALANCE mixed with the 4 STAR SKILLS felt drastically affected by the gameplay throughout the weekend.  While Rooney danced into the box time and time again, Reyna lacked the guile required to do so and in general succumbed to Drop Back Danny and his line of minions on the edge of the box.  With Reyna, I just didn’t feel like the responsiveness was present, which is too important to overlook.

The biggest surprise in this review for me was that somehow, someway, this card only scored 7 goals in 20 matches.  While the HUNTER shooting statistics look excellent, they are made even better by the MARKSMAN style and I was sure a bucket full of goals would follow.  Instead, what I witnessed was an average result... don’t get me wrong, Reyna utilized his 4 STAR WEAK FOOT and 99 FINISHING at times… but in the end, it was just too many missed opportunities and passed up chances to be the attacking force I required.  In the end, I definitely find that the cards that don’t reward the hard earned chances created throughout the weekend are the ones that ultimately disappoint me most.

At the current price, I simply can not recommend you purchase this card with your hard earned coins.  The card has some serious upside for sure and I am sure there are FUT Managers out there who are killing it with this card.  But there is no way I would endorse this card when you can buy FUT Freeze Ousmane Dembele for the same price.  With the addition of a 5 STAR WEAK FOOT or even 5 STAR SKILLS I could see a brighter future for Reyna in this year's FUT cycle… but I truly feel that in a week's time you simply won’t see much of the young American in opponents squads.  The insane drop off in price from Saturday evening also suggests to me that others are slowly noticing the same issues that I did this past weekend… or maybe it was just too inflated to begin with?  Regardless, my final verdict is this.  He will do a job and has serious upside there is no doubt… if Reyna is a personal favorite or any Dortmund fans out there, then at least you know the card can produce if necessary.  But for the rest of us, I would stay clear of this one if I was you.  Cue the “you don’t know what you’re doing” comments below.  Hoping you are safe and well.  Cheers for reading. 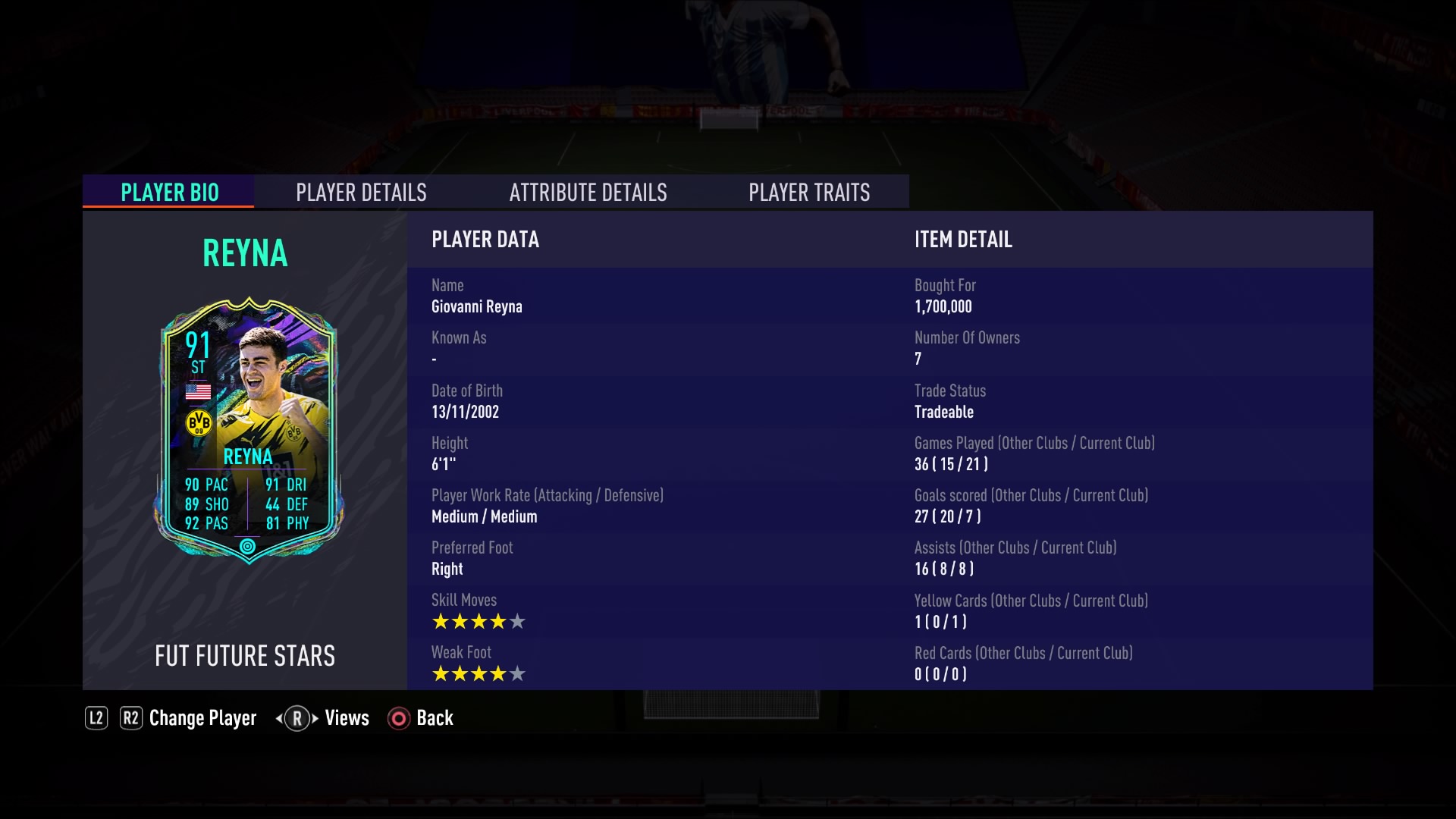 I got him out of my 25x 83+ pack for icon swaps 1 and quickly morphed my team to revolve around him and I have not looked back since. Through a couple weeks of champs and rivals he has made it so easy for me to score. The ball sticks to him like glue and he is easily the most responsive player I have played with. His L stick dribbling is unmatched in my opinion. I played around 20 games with him at CAM but he just ended up being my whole attack as I didn't really have anyone good in front of him as I had just made the team. I decided to move him to striker and played him alongside sif depay in a 41212(2) and he was even better. Reyna was always making the perfect runs and I knew as soon as I was through it was going in the net, he doesn't miss. The two standouts for me are his shooting and passing, but his dribbling is very good as well. He plays the best I think in a formation with 2 strikers as he not only can shoot but his passing is lethal as well and there were multiple games where depay would score multiple goals but they were made by Reyna. Playing De Bruyne behind him allowed me to really see just how good Reyna's attack positioning is and boy is it good. He is always in the right position at the right time. Hunter is the only chem style you are allowed to use on him as it makes him electric at striker, but maybe a different one would work better if you were to play him at CAM. His downsides are honestly so just not noticeable but if I were to really nitpick he sometimes is clunky and turns slow but thats honestly not an issue because I don't see it often. I can't say if he's worth the money as I am poor and got him untradeable but if you did have the money and were wondering what I thought, I think this is the best card I have used this year hands down.

Reyna is a overpriced player, but is so good for rich people, i used in a fut draft tournament. And he like mi so much.