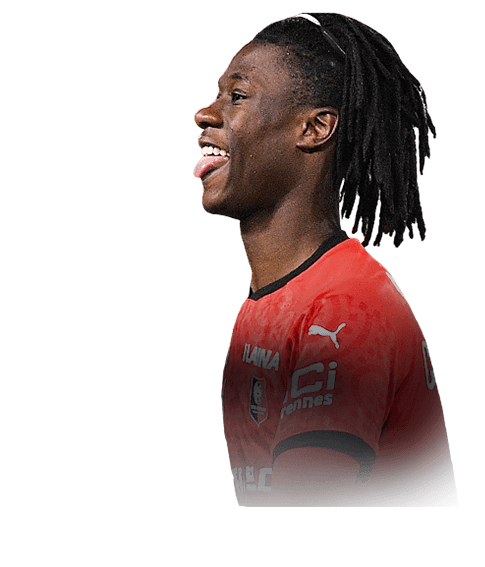 This card does not deserve even quarter of the current price. The stats are so fake. He moves like truck. Yes, he can defend. Good defending, but not even decent. I am so disappointed. If I want someone to only defend, I will use my Marquinhos; or even Andre. He is not box-to-box. I am not paying 2.5M to get a clunky CDM. I am Div1 player and I know what I am talking about. You can also what Nick review on youtube (check the link). Renato Sanches is miles better than him defensively and offensively. The new CDM card for Bruno Moura looks better than him, especially with better work rates for a CDM. What makes me angry the most is that he gets bullied by way smaller players. Mann!! this card is just his common gold with different design and ineffective increase in stats.

I used this card as a CM in a 352 alongside 87 Tonali. I used a Shadow chem style on him to push speed and defending stats even further. I played 41 games in Champs and Rivals with him and I am a Division 1 / Gold 1(sometimes E3) player.

97 Acceleration and 95 Sprint speed are looking great and Camavinga feels this fast ingame, especially when you add his Dribbling stats into the mix. On and off the ball he is moving fast an precise, just beatiful. Unlike another review is saying i didn't find him clunky at all. The opposite is true. I used RTTF Sanches before, who is really agile and aggressive against the ball. Camavinga is even more agile than him. In defense he can cover space with speed, similiar but better than Kante. On the ball he dribbles fluidly and is able to change direction really fast.

He plays to his stats in this category and his stats are amazing. Camavinga intercepts passes for breakfast and his tackles end with you getting back possesion almost every time. He feels a lot like RTTF Sanches there. Sanches feels a bit more aggressive, but Camavinga tackles and intercepts better. Camavingas speed and agility make him a constant threat one can't just dribble past, because he will catch you again. I didn't notce especially bad or good positioning defense wise.

As in every category, his stats here are good too. Stamina is enough for 90 minutes and extra time. Even in the first games of using him, where i forced him to do everything to try him out, he dind't run out of it. He is also quite aggressive and strong which make him a very good tackler an he doesn't give the ball away when physically attacked by a defender. Sometimes, I think because of his Lean body type, he gets pushed away a bit. But that's not a common thing at all. And I guess in a world where a Neymar outmuscles a Van Dijk here and there this is a thing I have to an can live with.

His Passing is phenomenal. Short and grounded passes are executed with the right amount of power and 100 % accurate. Longballs are great too.I always include him in my attacks, because he is capable of playing the last pass so consistantly. As soon as one of your attackers has a bit of space, Camavinga is passing so accurate and fast into his feet every time, just flawless - aboslutely mental.

I like it when my CM's are cappable of scoring a goal here and there and Camavinga can do that. or fast left stick dribbling with ease. When he was through on goal he scored, across goal every time with his left. His shot power of 95 made sure the keeper didn't stand the slightest bit of chance.

His longshots felt good too, but i didn't use them often. I scored one 1 goal that way out of 3 or 4 attempts.

Camavinga is just 3/3 here. While I would mind that on my attackers a lot more, i don't rally care aboute that on my CM's. The 3* Skill Moves are irrelevant for me, as I don't do any of them with my CM's besides a bridge here an there inside the box. And even this move i only do with Camavinga and not Tonali because he executes it so well. Of course I would like Camavinga to have at least a 4* Weak Foot, but I never had a situation ingame where i the 3* wasn't enougt. I play him as left CM, so his shots across goal always came from the left side and therefore were executed perfectly. I also didn't notice a bad pass with his weak foot.

Comparison to other notable Players i used this FIFA:

90 Gullit: Gullit is (probably) a bit better going forward, as he has a 5* WF and he definitely makes better offensive runs. Also his Size and Body type combined with his physical stats make Gullit more physically present in the midfield. Also Gullit is a real threat on corners with his heading capabilities. But Overall i found Camavinga is the better defender. Also Camavingas Stamina, while also 92, didn't drain as fast as Gullit's, probably because of the constant attacking runs of Gullit. In the end I have more fun with Camavinga and I would stay with him, even if I had the coins to buy Gullit back. Gullit is a tiny bit better overall though.

RTTF Sanches: I loved playing with IF and RTTF Sanches this FIFA. But Camavinga is better in every Category apart from Agression, which is noticeable form time to time but rarely when Camavinga tackles or is tackled. I clearly prefer Camaving over Sanches.

Headliner Goretzka (87): I really liked Goretzka, but Camavinga is way better. Not a single situation occured where I thought Goretzka would have been better. Ok, Goretzka scored a few Headers after Corners, but SBC Boateng takes that role from him in my team now.

88 Vieira: While (any) Vieira is probably the best Defender in the game and Camavinga can't exactly do what he can in this category, Camavinga is better in every other. I prefer Camavinga by a mile.

Camavinga is expensive, no question about that. After playing with a lot of very expensive Players i can say no Player more expensive than NIF Cristiano Ronaldo is worth his price tag unless you are playing at the highest level, which almost no one does. I hit E3 with a mega team, but also with a 500k team, so there is no need to buy all these expensive Players just for success in Champs. But if you are willing to spend a lot of coins on a Midfielder, I can absolutely recommend Camavinga. I haven't played with a cheaper card that is on par with him.