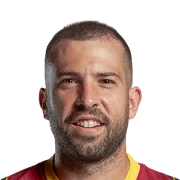 Well, I'll preface this with 'this is not the Mendy replacement'. I used Mendy before this guy and sadly he's miles ahead. that being said, they are very different cards, and in all honesty I genuinely enjoyed using Alba. I played with him mostly as a LB, but I ended up experimenting with him in the 352/532 meta as a LWB/LM, and this guy really shone. As a base LB with an anchor he does the job, decent pace, nice tackling and distribution, didn't really think the physicality was a problem. where I think he really stands out though is at an advanced LWB (with get forward of course). his dribbling stats are naturally pretty high, but maybe its his unique body type or something, but he really felt like a winger on the ball. Felt very confident skipping past fullbacks, but 3 star skills don't really help. His passing was alright, sent in some killer crosses and notched up 6 assists, but really nothing special to be honest, most would have been pretty disappointing if they hadn't hit. as far as shooting he only managed to get into the box for one shot and he actually scored, but that was because I used him with a hawk, don't rely on him for this. Basically, he's a pretty flexible card, probably the best Spanish Laliga option to start at LB, but Grimaldo UEL live is better from Spain and Mendy is better from LaLiga. Would recommend for useful links and a usable card.