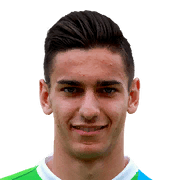 4.5
This guy is actually an insane guy
6 users liked this review

I’m a Napoli fan so I had to try this guy out, I got him out of red picks (thank god, I saved 15k) benched van der sar slapped a glove on him on started playing. First game in, he saves 10 shots and keeps a clean sheet, he got motm and won me the game because I didn’t even play that well. I’ve kept him in the squad since and I don’t regret benching that untradeable van der sar. He’s saved countless shots from difficult situations. And what I love about him the most is that even if the opponent gets the rebound after the first save he gets up quick and saves it again. One time he saved 3 shots in 10 seconds before you say that is a once in a lifetime happening, I’ve had him for 3 days.

leg saves (even though he dosent have the trait)

Height, although chip shots barely work anymore so it dosent even matter