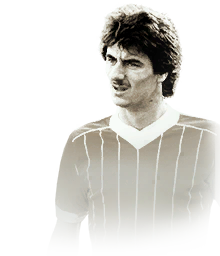 They are finally here! The Prime ICON Moments arrived a fortnight ago and with new and improved dynamic images and some heavy price tags.  A week into their existence and the prices started to reach more affordable levels and with that came the opportunity to take a look at some of these new options.  One of the cards that immediately caught my attention was Prime Moments Ian Rush… as a Liverpool supporter it makes sense that the greatest goal scorer in Liverpool history sparked interest… but truthfully it was those insane statistics and improved 5 STAR WEAK FOOT that raised my FUT intrigue to a “must try” level.  Of course, if you followed this card immediately after drop it was impossible to test him as Rush remained extinct on the market for a solid 5-6 days.  Finally, the line broke and Ian came rushing into the market making a Weekend League review possible.  Given the already boosted Pace and Shooting statistics it was clear that an ENGINE chemistry style would be needed for this review… while the positioning was never in doubt either as Rush led the line in my 4-2-2-2 all weekend in the following squad: 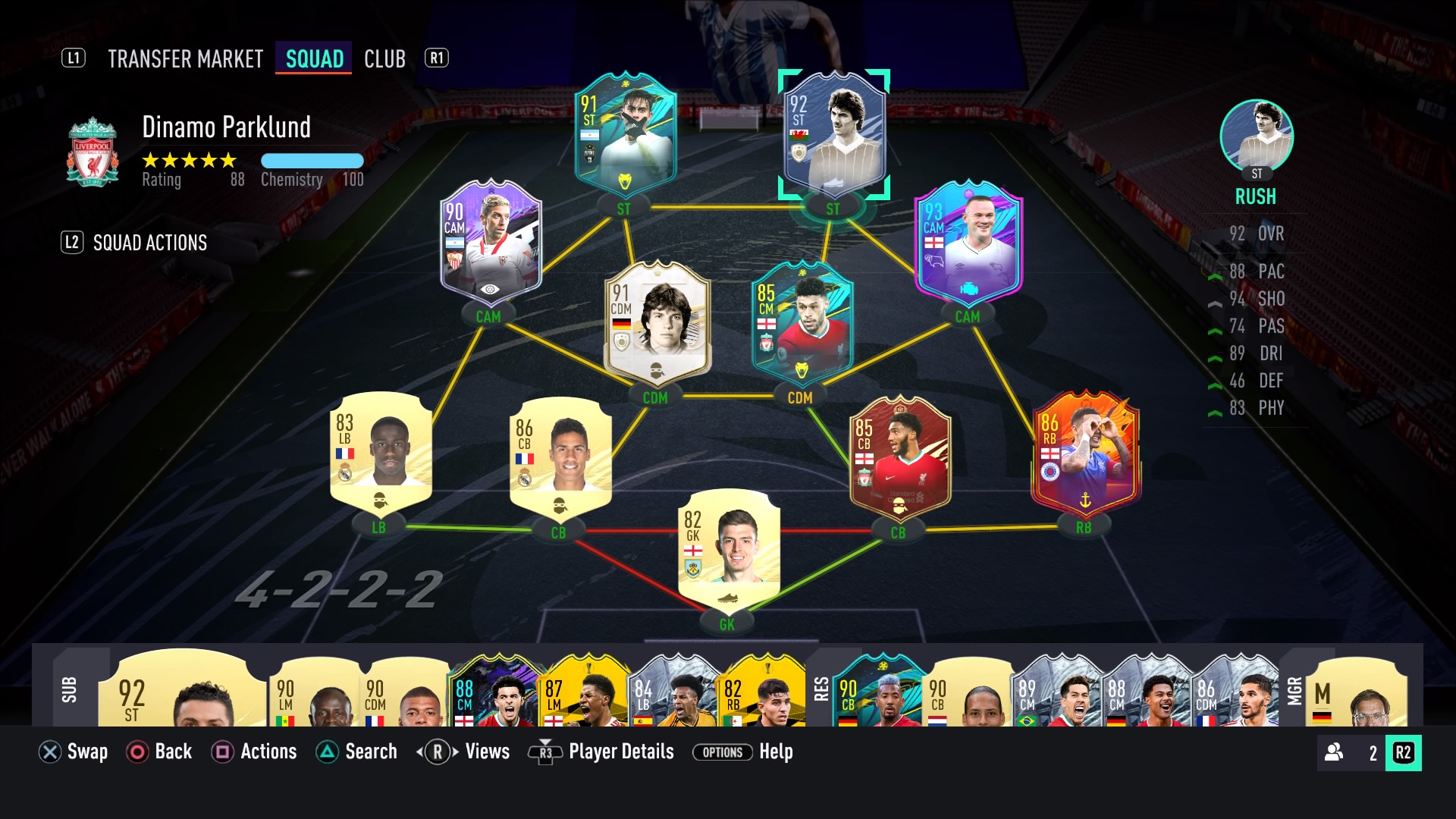 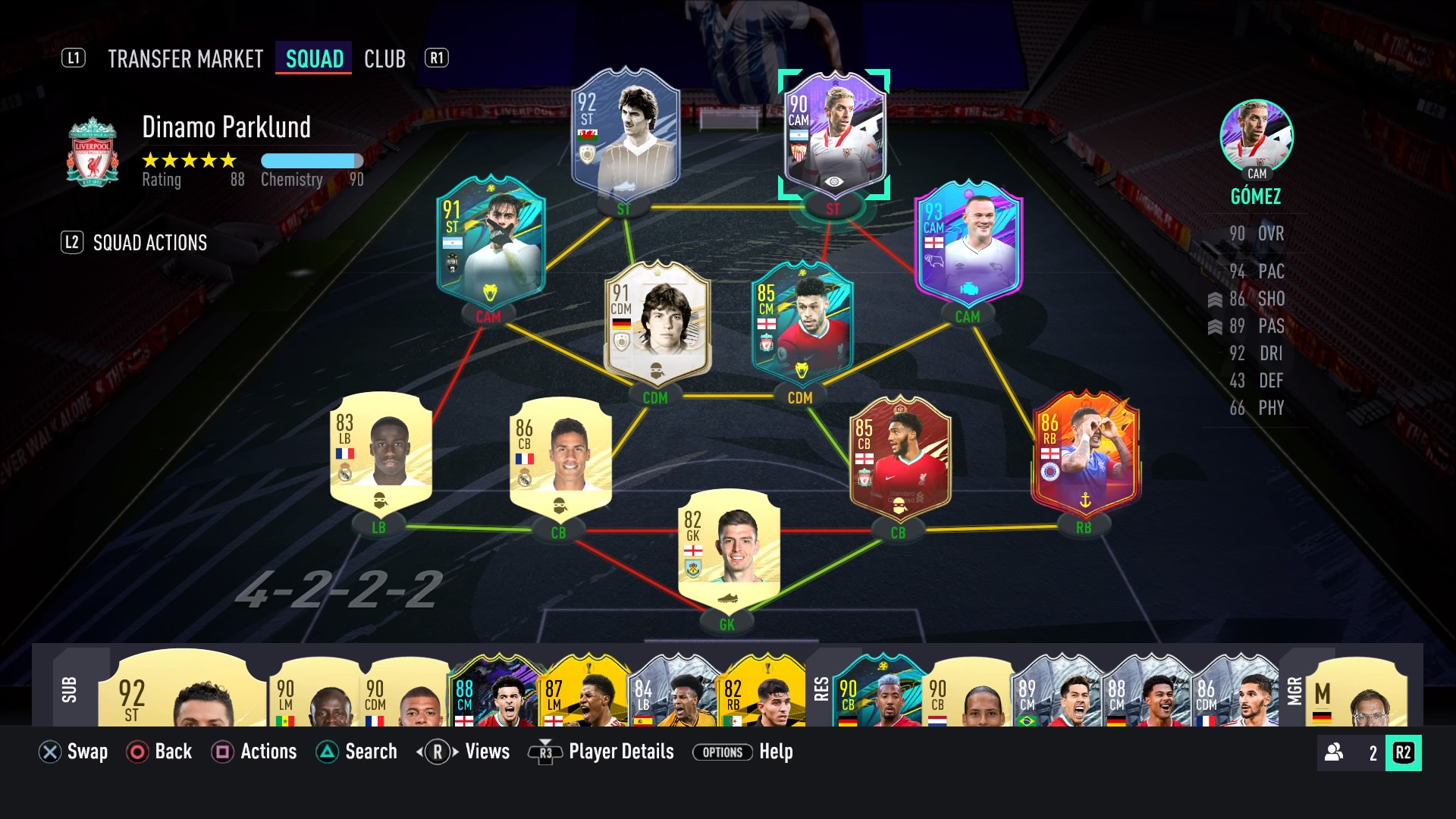 Needless to say, my first experience with a Prime ICON Moment in FIFA 21 was a memorable one.  This card was always at risk of falling short of expectations given the incredible statistics and hype behind the Moments release.  However, if anything, I think this card has benefited from some of the hidden ICON statistics that have become a theme since ICONs were added into the game.  I think we have all been there before… an ICON from the club you support drops and immediately you want to bring them in… you save the coins… but sometimes our expectations are met with a poor card and ultimately ruins the entire experience.  Thankfully with Rush, this was the opposite and I couldn’t have been happier with the performance he put on display this weekend.

If you read my previous review on What If Gomez or follow me on Twitter: @MaeNine_ then you will know that I essentially had two 5 STAR WEAK FOOT strikers this weekend.  I am not 100% sure but that might be the first time that I have used two players so dominant on either foot and it goes without saying that it definitely made for a more lethal attack. With Rush, the possibilities are endless as he can not only hit them with both feet… but has the traits to provide almost endless possibilities for goals.  96 POSITIONING, 96 FINISHING, 92 SHOT POWER, 91 LONG SHOTS, 95 VOLLEYS… it just feels like saying they are all 90+ doesn’t do the card justice.  Overall, the 26 goals were not the massive contribution I would have hoped for… but as a tandem striker in the 4-2-2-2 it is normal to share the goals… and with 17 assists it is clear how instrumental Rush was to the success I had this weekend… +2.0 goal contributions providing proof of his dominance.

5’11 | 180cm is about on the borderline of when cards start falling victim to clunky/slow turning and sluggish acceleration.  With Rush, it felt like the card was being held back at times, but overall was as quick and agile as some of the shorter players I have reviewed.  The 92 ACCELERATION & 94 SPRINT SPEED was an excellent combination and didn’t leave me considering a HUNTER or CATALYST chemistry card at any point.  This leaves the door open for the ENGINE chemistry style and a boost to 89 AGILITY & 91 BALANCE, which allows Rush to be responsive on the ball, but at the same time I should note he doesn’t dance on the ball like What If Gomez and other agile players can.  Yet, the list of weapons keeps on growing with this card as his taller frame paired well with the 87 JUMPING, 93 HEADING ACCURACY, & the POWER HEADER trait… making Rush a versatile weapon for however you want to deploy him.

1.1 million coins just feel so low for this card.  I can accept that with 3 STAR SKILLS there are some FUT Managers that simply wouldn’t touch this card regardless of the upside.  Additionally, the Passing statistics are not great on paper… but my experience this weekend was almost 100% positive and again the 17 assists are proof of that fact.  I can also agree that at times in poor gameplay this card could feel heavier than a more meta option and therefore could drive some to pass on this card.  But at this point, I am really reaching and still can’t find a major reason that this card is so low.  When you search FUTBIN for other cards that have the same minimum statistics as Rush in Pace, Shooting, Dribbling & Physical you get a list… the cheapest being TOTY Lewandowski at 2 million… PIM Stoichkov at 3 million… TOTY Bruno at 4 million… and the rest are 7 million+ or extinct... None of them have a 5 STAR WEAK FOOT.  Again, maybe the 3 STAR SKILLS is the price killer in this case? But for me, the upsides far outweigh any negative experiences I had with the card this weekend.

More Prime Time! That is what I am taking away from this weekend's review of PIM Ian Rush.  The Liverpool legend with the iconic mustache was in fine fettle this weekend; scoring goals, creating chances, providing assists, and truly was the talisman in my squad.  It goes without saying that this card is a must-try if you get the chance… the improvement to a 5 STAR WEAK FOOT is the key addition to putting Rush into one of the top categories of strikers in FIFA 21.  The price is still high for many FUT Managers, but I want to still say it is “affordable” given the number of in-game statistics and traits that you get for 1.1 million coins.  In the end, I now have my eye fully fixed on more of these PIM cards and hopefully can continue to get these reviews out to you in the near future. Hoping you are safe and well.  Cheers for reading. 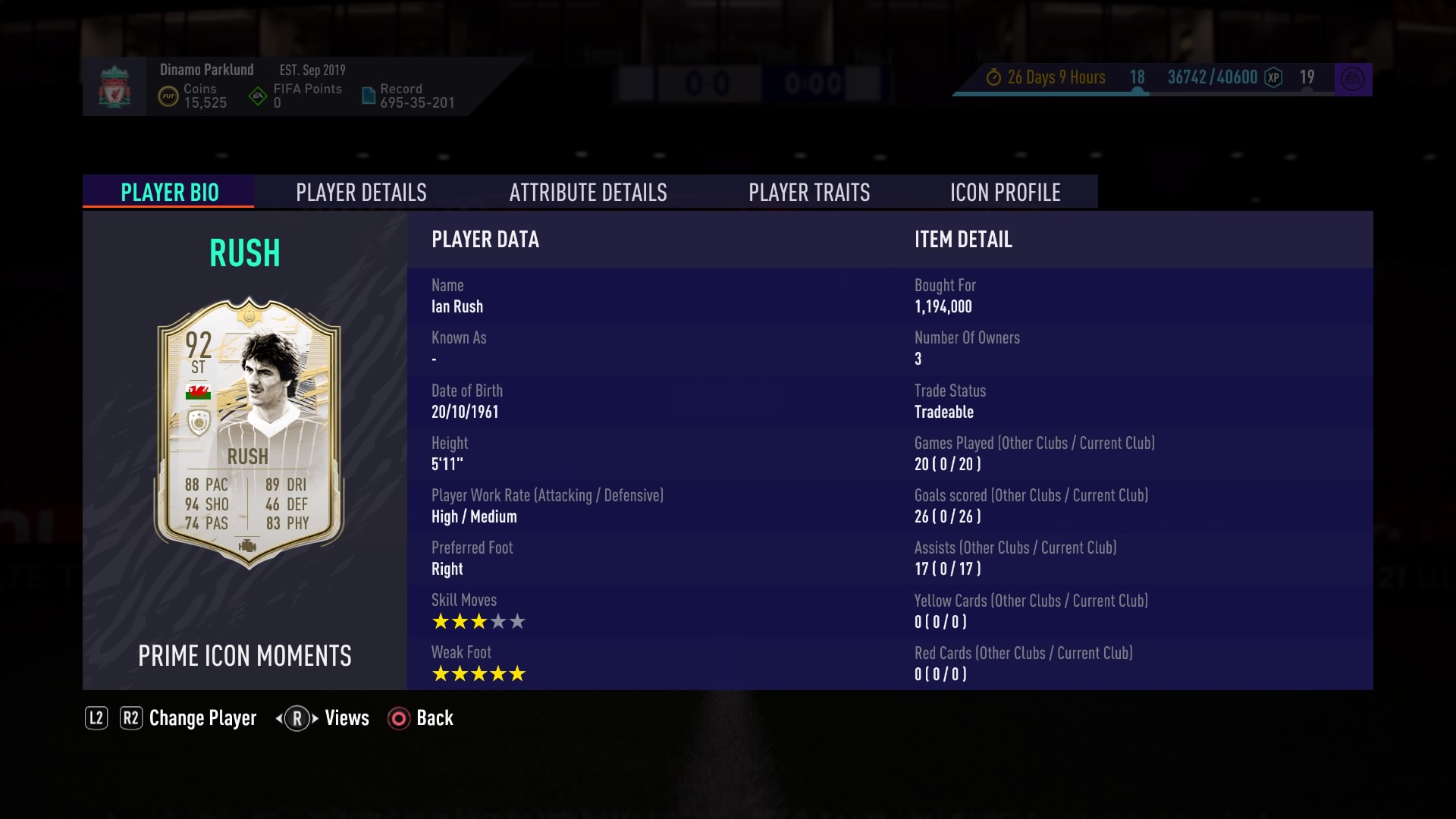 I am a Liverpool fan and so I wanted to try out Ian Rush moments card and whilst I was sceptical at first, he turned out to be very good and sharp in front of goal. I have played over 50 games with him in div 1 and fut champs and progressively got better as I got used to him. I used an Engine chem style on him in a 4231 and some games striker in the 41212(2) and he was much better in the 4231. I am not much of a skiller so I do not mind the 3* skills and the 5* weak foot is very noticeable. His shooting is very good in the box he hardly ever misses. His passing is quite good but I wouldn't recommend him as a cam. His pace is not amazing as he definitely is not your Mbappe or Neymar with insane pace but is good enough when getting in behind. His agility and balance is quite good as well. His strength is nice and when fake shotting across players as he keeps the ball at his feet very well. His headers are not too bad either. If you are thinking of getting him I highly reccomened it as he is great value.

So I got this guy from my guaranteed icon moments pack and was devastated after i saw his price. After using him for a bit i found he was actually quite good. Very agile and that 5* weak foot is amazing. Brilliant card for the price and shooting is immaculate. He feels alot faster then 88PAC and i did put a hunter on him too. I played him by mbappe and since i already had a pacey striker he performed excellently as a clinical finisher. Great card and fun to use if you dont wanna be a meta rat.