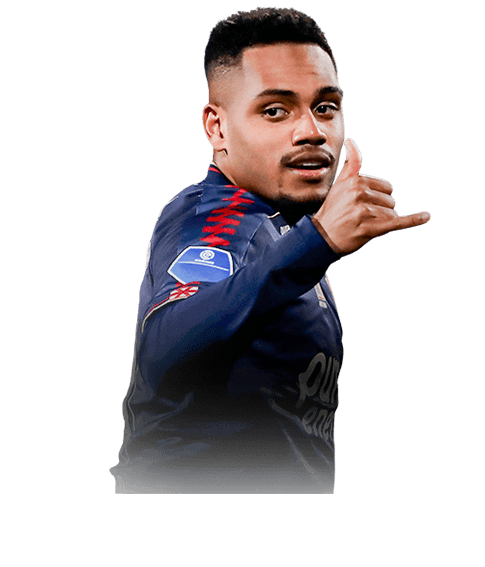 I looked at the second batch of Eredivisie foundation players and I saw this really interesting Brazilian 85 Striker fromTwente Danilo, I was really happy about a free brazilian card but I looked at his stats and things kinda made me take a few precautions, for you who hasn´t seen the objective yet in order for you to get this card you´re obligated to play 18 Matches in my opinion its a lot of games considering that you only have to win 8 of those. But I grinded that out took me 5 hours of pure stress but I finally got the card I wanted to test. I subbed him on the 83 Alex Teixeira and slapped a hunter on him so he could boost that Finishing. And went for a few rival matches. He was in a 4-4-2 beside the 87 Reinier and despite being only 3*3* he´d actually was fun to play. Danilo is a small and pacey player with a lot of in game dribbling. Don´t be fooled by the 3* WF. I´ve only played 12 Matches and until now he hasn´t missed a single shot on his Left. He can score some bangers from outside the box too. That last quarter of the field is his danger zone. Even thou I liked playing with him Alex has to come back into the team. Of course he isn´t a meta card, But he´s genuinely fun to play with.

Heading: 96 Heading accuracy its a win for me.

Finishing: He was very solid with his shooting both on right and left foot.

Time: 18 Matches is a long period of time for Danilo.

Links: Not easy to link.

The 18 game requirement is a bad choice by EA for this card. Whilst links are there, theyre by no means perfect, I played him as LS in a 41212 alongside Cunha headliners RS and Future Stars Reinier in CAM. Although he already has decent pace and shooting i used a hunter to max them out. He was quite the clinical finisher, only really missing a few off of his left foot due to the 3*WF and 3*SM was very disappointing however his lateral heel2heel seemed much slicker then normal 3* SM players, perhaps due to his 5''9 height and overall high dribbling stats. Good passing for a striker, just don't expect him to ping 30 yard balls and pinpoint crosses and his physcial stat for me was decieving as i felt he would often outstrength gomez and Varane despite only having 76 strength. 96 heading felt kinda useless since hes a little short and has relatively low jumping.