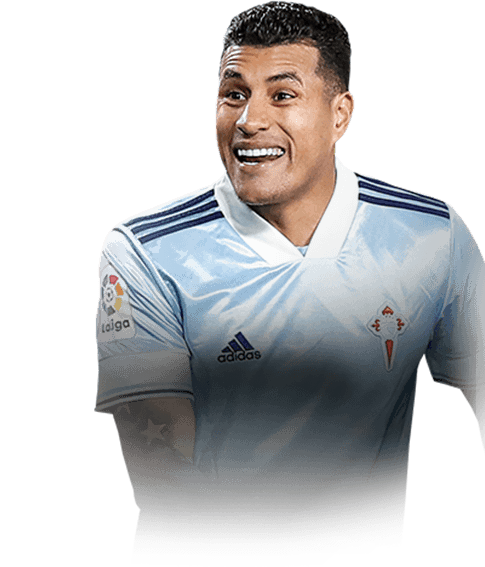 I play FIFA for fun, and when I saw this card I immediately bought him for 17k and put him in my team. He should most definately rise about 10k in a few weeks. I played him shadow with Martinez 84 GK, 86 Cuadrado RB, UEL Atal LB, and Davinson my other CB. Yazici and Tello were my 6 and 8 with Prime Okocha LAM, Riquelme base CAM, and Ben Arfa RAM. You can probably guess who my striker was by my username. I play in Div 3-2 and get gold 2 usually in champs.

There has been a lack of Colombian players this year and finally I got a sick Colombian card for 17k. His pace is good, not insane, but good, acceleration could be better, but his sprint speed is quality. His passing was a pleasant suprise, his composure is good and he can hit long passes on a dime. My only problem with his passing is a lack of curve, but that is not the end of the world. His dribbling is good for a CB, sometimes his first touch is not great. Agility feels very nice on this card, and the stat is at 82 which you can definately feel in-game. His stand tackles are not like VVD or Ramos, but are still better than probably any other 17k CB. This card's best attribute, except maybe agility, is his amazing shot blocks and interceptions. He will block every shot within 5 yards of him, not quite on a Varane scale, but close. (Just going off of experience against Varane, I have never used him myself. I packed him once but put him in the 5* 85+ pack 3 mins later just to get trolled by Di Maria.) It also seems Murillo has mastered the art of teleportation with his interceptions, this card's reflexes seem like 99, even though it says 79. Unfortunately the he seems to intercept the ball but not get it under control a lot of the time. His physicality is not exceptional, but also decent for a CB, he has a decent build in-game, but if you come up against a tall striker he will struggle in the air

I am also playing this card on 7 chem, so give him another 3 chem points and he will be even better. I don't think he is an end-game card by any means, but if he gets an upgrade to 84 he will be a very very good card. I apologize if the review turns out pink, I can't figure out how to make it unpink again.