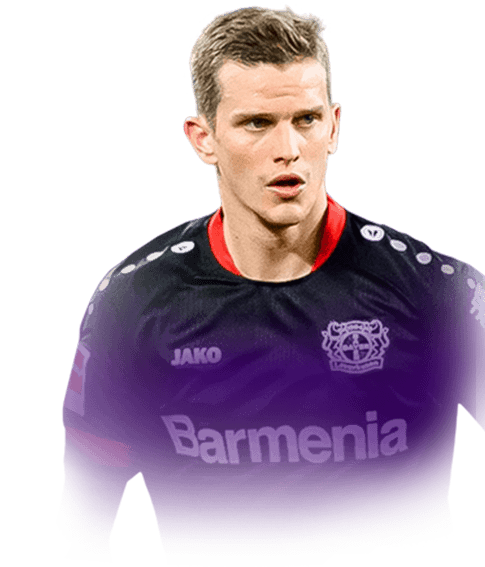 Friday morning I was talking to a friend about our squads. We were both like "I hate using Varane because makes me feel like I'm a sweat like those people who use fullbacks as CB", but considering the WL is the sweatiest mode on FIFA (and maybe one of the most in all games), I didn't see many options to occupy the position properly. Then the Bender Bros SBC comes out. I think: considering he is a German from Bayer Leverkusen, I can fit him in my squad and keep my Flashback Kroos and What IF Wendell as they already were there. Done. There I was, set to another WL.

Then this happens: he is AMAZING on the pitch. Feels like a mixture of Varane and Ramos (which I really like too, but lacks the pace against all those sweats teams), but giving me more confidence. He's a perfect pair to Prime Cannavaro, seems like one is always watching each other's backs, instead of focusing only on who they're marking. Plus, he is an absolutely unit on headers, he saved me from potential goals from crossings several times.

Bottom word: what a CB. Totally worth the investment. Varane is history now. If you can fit him in your squad, go for it.

PS: I know some you will be like "bUt WhY dOnT yOu UsE lArS aS cB iNsTeAd?" and when you break down to things that matters most to a CB, like reactions and composure, you see that it might matter more than stats like dribbling (that only seems to affect players when they're with the ball) or pace. Which, BTW, Sven also has A LOT, especially using Shadow.

4* WF (great to distribute the ball with ease after tackling)

For those asking which Bender SBC to do, the answer is without a doubt BOTH! The question floating around the FIFA universe is why not just do Lars and play him at CB. The answer is because Lars is a RB. Play the game the way it was intended. Don't be a slave to the meta BS. This game is for fun and none of us are having our games watched by scouts ready to give us the call to the pros. Play the game and have fun. If you actually are good, you don't need to play players out of position to win.

On to the review.

This Bender card is absolutely outstanding. A bit of a spoiler alert here, there really aren't any cons that you can pick out. He has good pace, good passing, good agility, great defending and more than enough physicals to be really really good. One thing that really stood out was his positioning. He covers other defenders really well. He really seems to actually read what is going on in front of him to be in the correct position to make a play. And when he does go for a tackle, he doesn't miss. I would recommend shadow or anchor for him. Deciding which is up to you. Shadow obviously gives you slightly better pace, although he is fast enough with anchor. His defending stats with shadow gives you 99 interceptions, 89 heading acc., 96 def awareness, 99 stand and slide tackle. On the other hand, with anchor, he is still plenty fast, 96 interceptions, 89 heading acc., 96 def awareness and 99 stand and slide tackle. The bonus you get with anchor is 95 jumping, 95 strength and 98 aggression. Good luck trying to outmuscle him!

With either shadow or anchor he's fast. Good acceleration and top end speed to keep up with even the faster strikers. Plus, with his positioning ability, he rarely gets caught out anyways unless you make a mistake.

Well, I'd say don't shoot with him.

Better than I expected. The low curve rating of 39 was slightly worrying but in game it wasn't a detriment to his passing. He has 77 vision, 93 short pass and 83 long pass. I found he could consistently make any of the passes that I needed him to. His passes were also very consistent with both feet due to his 4* weak foot. Just don't expect him to be a De Bruyne on the break.

With base stats of 85 jumping, 84 stamina, 85 strength and 93 aggression, he gives you everything you need. A comparison I will make is Van Dijk.

With a maximum cost of less than 250,000 coins, there aren't many CBs in the game that can give you the same stats and more importantly, in game performance. Is he the best of the best, no. Although, in my opinion, he is best in the Bundesliga at this point. Also, I wouldn't pay the coins for the other CBs that may be slightly better as they are double the cost at minimum. If you are doing a Bundesliga or German team, this should be one of your CBs. I have Akanji at the other CB and Bender's brother at RB and they form a wall without a doubt.