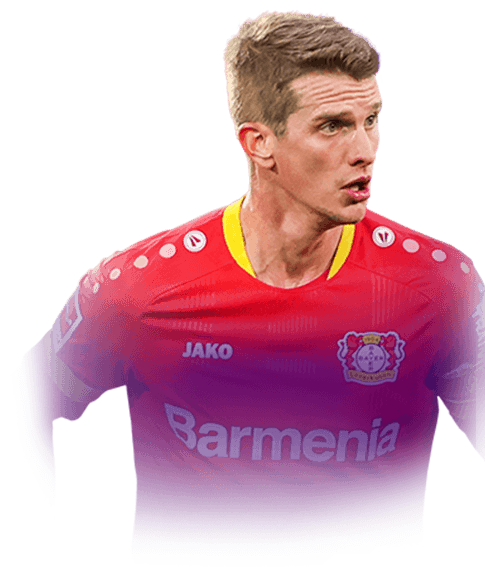 Immediately got this card after it came out, I already had Klaiber but he looked better and I can confirm he is WAY better than him plus I needed a good SBC to put the duplicates I had. Talking about price Klaiber is much better, probably best SBC so far. You can call me a rat but you can’t say that he is an insane CB. I played him at CB alongside Cannavaro, wanted to get his brother too but again I had Cannavaro and I’m quite bad using 3 CBs. But if you get both it looks like an amazing duo of CB, or even this Bender could play at CDM. Obviously at RB he is really good too and can be a good option if you missed or want someone better than Laimer/Mukiele. Perfect link with his brother too

Definitely fastest CB I have used, in my opinion Acceleration is really important for a CB, more than Sprint speed but this guy has both. To start with an amazing 99 acceleration plus that 95 sprint speed. If you are playing Fut Champs you will probably face him a lot. Then his agility and balance are really good and will give him a plus

Insane passing for a CB, specially because I had Cannavaro it was finally nice to have a CB that could pass the ball far. 3* wf is ok

Insane agility and balance, good reactions and quite good ball control. I can tell you it is way better than 82. Dribbling stat is 77 but doubt you will try to dribble a lot with him, even at RB

He is an absolute beast defending, at least with anchor, body type is ideal for a CB, as well as height, combined with defending a nightmare to go against. Work rates are perfect which makes him better than Klaiber at CB

Without chem style it doesn’t look really good but with anchor it is INSANE. He literally played as Van Dijk in real life, bodying everyone and outpacing them, being always where he has to be. It is an amazing player and in my opinion an outstanding price.

Perfect link with his brother

Defending is amazing with his body type

Unless you want to make skills with him no cons

I was lucky enough to be able to both Bender SBCs and I couldn't have been happier with the performances that both have given. I have used a lot of the top RBs in the game and without a doubt, Bender has been one of the top ones. It's also a huge bonus that he is a fraction of the cost that the others cost. I mentioned this in Sven's review and I'll repeat it here. Don't be a meta whore, it doesn't make you good. Just makes you a follower. Have fun and play the players you like. So for all of you that are curious about how Lars plays at CB, go read or watch someone else's review. He's a RB, play him there and enjoy his performances. For those of you who want him to play the position he actually does, read on and enjoy.

I use an anchor on him and he is fast. 99 acceleration and 95 sprint speed. He keeps up with anyone. At 6' 1", he also seems to eat up ground quick due to his longer legs and gait.

Not great at shooting but respectable for a RB. His priorities are definitely defending first, crossing second and if he has a clear chance, shoot. He has pretty good shot power and pretty good long shots for a RB. This paired with 84 composure and 78 curve gives his shots a bit of a chance to go in.

84 vision, 83 crossing, 85 short pass, 83 long pass and 78 curve. I've found he can complete any of the passes I need him to consistently. His crosses are good and he picks out players well. Worth mentioning, even though he has M/H work rates, he does get forward well and if you need him to get forward more, use manual run trigger.

Now we start getting to what makes him so good. 90 agility, 89 balance, 86 reactions, 83 ball control 77 dribbling and 84 composure. All of this combined with his physicals makes it very difficult to get the ball off of him once he's taken it from the opponent. I felt he was much more fluid on the ball than Mbabu What If. I also found he made Reece James Future Stars feel stiff as a board.

93 interceptions, 86 heading accuracy, 95 defensive awareness (marking), 97 stand tackle and 96 slide tackle. He's crisp and accurate with his tackles. Unless you completely botch the tackle attempt, he won't miss. I've noticed, much like his brother, when a pass comes his way, he does a great job of stepping up in front of the attacker and intercepts the pass on a regular basis.

91 jumping, 85 stamina, 92 strength and 89 aggression. These attributes combined with his agility and defending stats make him a real force. He is also a legitimate threat in the air both defensively and attacking.

It's easy to think this guy has everything you'd need for a fullback. You'd be right. He has the pace to deal with the fast attackers. He has the agility to move laterally with players like Messi. He has the strength and aggression to bully the Ronaldo types. He is a very complete RB. There really isn't a glaring weakness. As I mentioned above, if I was nitpicking, you might shy away due to his M/H work rate. Don't let that deter you. He actually moves up the pitch pretty good. If need be, you can manually trigger the run or put his instructions on get forward. As an added bonus, he's very cheap compared to fullbacks with similar attributes. I believe he is better than Reece James Future Stars as an example. He's also half the cost if you have to pay full price for the SBC.

-finishing is a bit low

Im a div 1 player and I thankfully did enough 82+ to complete Bender and decided to sub him on at cb and im so happy i did. His pace is incredible for a cb. He easily keeps up with the likes of Mbappe and Ronaldo. His M/H 6'1 frame is perfect for a cb and i would say hes better at cb then rb. His defending is great as he is strong in the tackle and my favorite part about the card is the agility and balance for a cb. He can keep up with skills and quick turns with his agility. If you have the coins then i definitely recommend doing him.