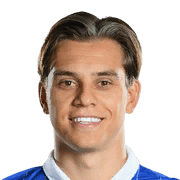 16
Sub out
Upcoming Matches
P. Chemistry
Squad chemistry
ST
80
RW
84
LW
84
CF
82
RF
82
LF
82
CAM
83
CM
77
RM
83
LM
83
CDM
58
CB
48
LB
56
LWB
60
RB
56
RWB
60
Reset
Basic
Sniper
Finisher
Deadeye
Marksman
Hawk
Artist
Architect
Powerhouse
Maestro
Engine
Sentinel
Guardian
Gladiator
Backbone
Anchor
Hunter
Catalyst
Shadow
Comments
Reviews
0
/600
Update my avatar Dos and don'ts
Top Rated
New
Controversial
Show comments
Top Reviews
Only logged in users can submit a review
A review must be written in English
At least 200 characters are required.
Compare this player to other similar players you have used(optional).
If you import your club to FUTBIN or send us an image with the player data(fill the form below) your review will be marked as verified.
Include what you liked about the player in the pros area and what you disliked about the player in the cons area.
Your review will be manually checked during the next 24 hours.
Chem Style Used
Formations
Position
Rate Player Base Stats (1-10)
Pace
5
Shooting
5
Passing
5
Dribbling
5
Defending
5
Physicality
5
Most Used In:
Submit Review

In my 7 years of playing FIFA ultimate team, I have never written a review. But, considering how hard Leandro Trossard just carried me in Icon Swaps, I felt this very necessary. So today I am building my prem squad for swaps as per usual and I find this 82 rated cam in my club who has decent stats, I figured I'd give him a go because it's icon swaps and who cares, right? This guy was a magician. An absolute maestro mixed with a pinpoint finisher. People tend to do first goal wins in icon swaps, this man directly contributed to all 10 of mine, scoring 8 and assisting 2. He just felt so agile and he was just constantly making insane runs, that not even my real ultimate team players like eusebio or mbappe make. His driven through balls made for very good one-twos, and I doubt he misplaced a pass all ten matches. This all sounds great, right? His finishing is his best point in my opinion. Every thing Leandro touched turned to goals! His finessing is definitely plus, they all went in to the top corner EVERY. SINGLE. TIME. His low-driven shots were also very very good.

I didn't thought anything seeing that card in my 81+ player pick pack, but I gave him a go. I could say it was one of the best decisions I made so far in FIFA 21. I played many BPL CAMs so far - Bruno Fernandes, De Bruyne, Havertz, Ziyech, even Mid Icon Kaka and many more, but Trossard blew me away.

In-game I play him as a CAM in a 3-5-2 (yes, the "Meta" is kicking in, but it wins games) with the following Instrucions

He got a Engine Chem Style I had laying around since I needed a good passer who is also capable of being fast and with good dribbling stats. With the Engine he gets a rating of 87 (according to the player page on FUTBIN) but for me he feels like 90/91. Sure, the Reactions are somewhat of a killer (74), but with the Engine he has 91 Pace, 88 Passing and 92 Dribbling (with 99 Agility and 99 Balance). I hadn't had high expectations of him performing as a goal scorer, but he delivered more than I could have ever imagined - Finesse, lob kicks, Shots outside the box or even 1v1s in the box - this guy seems to have placed magnets inside the opponent goal since he could score from anywhere.

One of the only downsides I've had where the low Strengh (66) and Aggresion (52) which make him a bit weak in those 1v1s with a CB. But if you can skill and know your way around Defenders - try him out. For just approx. 20k coins he is a steal imo.

not good at Heading Accuracy

Reactions a bit on the downside