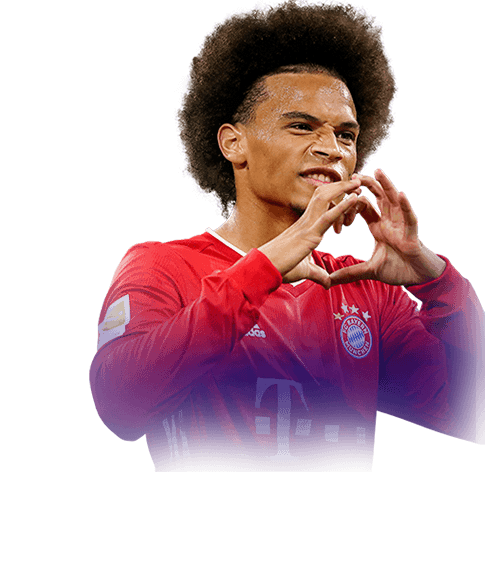 His real-life stats are currently 2 goals and 1 assists in 7 matches in domestic competition. He also received 2 yellow cards and 0 red cards.

I got this card from the 83x10 pack and I was extremely happy, I didn't expect such a crazy pull. Obviously i had to build a team around him and I linked him with Fut Birthday Chan and Neuhaus FS (both very good players). I used him as a striker paired with prime Drogba and they were very good together.

Sanè's speed boost with the directional nutmeg is just stunning for defenders and the shooting is very good with the 5 star weak foot being an important factor. Dribbling is also very good, but I suggest to boost it (i used the FINISHER chem style) and since he is quite tall (1,83m/6ft) he can battle physically with Varane and company.

Overall this Sanè is unbelievable, he was one of the few cards that really made me want to write a review. The price is right, so if you can get him.

dribbling-very agile and responsive, probably the best part about this card

I packed this gem of a card in a random pack i had in the store, suffice to say i was ecstatic.

You can literally score from anywhere, finesse shots are a joke and he doesn't even have finesse shot trait. He's also pretty quick i haven't had a problem with defenders catching up to him or even out muscling him. His dribbling is also pretty good paired with the 5* WF this card is a monster in front of goal.

Overall I'd say that this card is incredible and the price is bang on he is a 1+ mill player, would definitely recommend this card for anyone whose trying to look for different strikers to use.

I am a big Sane fan so I have been eyeing this card for a while. I couldn't afford it when it was up in the 1m+ range but TOTS has brought him down, and probably will drop even further when the Bundesliga TOTS drops, so I think a lot of people might be looking at this card now. I was a little skeptical because there seems to be mixed reviews on here. Some people say he is god tier while others complain he is clunky and not as fast as presented. The first night I got him I tried a lot of different chem styles and ultimately stuck with the finisher which is the clear favorite on futbin, although I did find Hawk was good if you just want to rock with his base agy/balance. After I got the chem locked down and got used to the card he has been nothing but sensational for me. Yes he doesn't have a ton of strength but I think we have all lost headers/tackles to a gold neymar and honestly it isn't a big deal. Sane's left stick dribbling animations are good, and he is very effective with directional nutmegs. 85 heading also makes him pretty decent in the air with his height, and honestly catches people offguard just like the 5 star weak foot. I play him mostly as a striker and his stam has been good enough in that position. Honestly I know the price might drop but he is so good for me, and I am a fan of him IRL that I more than likely will just keep him into Bundesliga TOTS. I doubt they would give him a TOTS card since he hasn't even gotten an inform, and has been getting back in shape after a terrible knee injury last year for Bayern.

I've used him in my BuLi Team as a ST or CAM. I bought him, because of the fast defenders (Gomez, Walker, Tapsoba etc.) in FUT21 and there are no other fast BuLi ST.

SHOOTING: Shooting wasnt that good although i boostet him. Swapped him with Birthday Özil on CAM and was disappointed that Özil strikes much better.

I’ll start by saying that I am usually a Gold 2 player (so I’m trash). With the FUT Birthday promo and the incredible German players cards released I decided to buy this sane card and try him out. I sincerely do not regret it as I made it to gold 1 the last weekend league and Sane had a lot to do about it. I played him as a striker right next to Neymar (I know very basic) and they were wonderful together. Neymar as the dribbler and Sane the finisher. He isn’t a player you want to do a lot of skills with but he isn’t also one that can power through defender with just pace. You need to balance. He shines the most when you learn to create space with him to shoot and finish cause he is excellent (5* weak foot is a huge bonus) His attacking is quite amazing so take advantage of that. He seems to always be at the right spot at the right time so when you have a neymar who can hold the ball very well all you have to do is pass at the right time. He isn’t physical at all but because of his high dribbling (balance and composure) he can hold himself for a few seconds against the toughest defenders just dont overdo it. Also he has such a high acceleration he is (unfortunately) the best player for directional nutmeg and bridge (just once again dont overdo it). Overall an amazing card, not overpowered but very lethal when you use his strengths right. Also he is quite tall but has terrible header but it allows him to dominate certain defenders

Price (not so bad)

in my opinion he is meta but not too much

I have been using freeze gnabry ever since he came out and i got so happy i could finally upgrade with this card. However i feel like my gnabry has been buffed a lot somehow after this card came out causing a problem as sane is 1 million coins. I decided to buy him though and although he is a tad overpriced and although much faster only a bit better than freeze gnabry he is still a very good card

-very quick on the ball

-passing really takes this card down a notch in my books

I packed this guy in the 83+x10 i had saved for fut birthday. i was obviously very happy and built a team around him but to be honest this card is very disappointing. idk if its the height or the unique body type but hes just very meh in game. i was playing him in champs in a 4312 at right striker with flashback el sharaawy at cam and the new fut birthday palacios card (palacios is incredible btw) at left striker. after those 10 games i am 8-2 with sane having 3 goals and 1 assist. el sha has 7 g 12 a and palacios has 11 g and 4 a. i am div 1 in rivals and im not a meta rat (i dont use mbappe neymar varane mendy, i try and build teams with players or cards i like.) he was on 10 chem with a finisher chem style and he just wasnt doing anything. he felt incredibly slow and just couldnt get past anyone, when he shot he did have a decent shot on him but he just never got into the positions to score the goals. his left foot finesse never went in even in positions where you would expect any attacker to score a goal. his dribbling felt really poor, he could keep the ball close to him but he turns like a bus and gives away the ball under pressure from any half decent defender. i dont know why hes so bad for me as most reviews ive seen have said hes very good but he didnt feel good at all for me. if you need a bundesliga player i would highly recommend hwang hee chan fut birthday over sane as he was also in the 83+ pack and is just much better than sane in game for me even at first as a super sub on 5 chem with a basic. if you want to play him as a striker or prefer nimble players i would steer clear of this card.