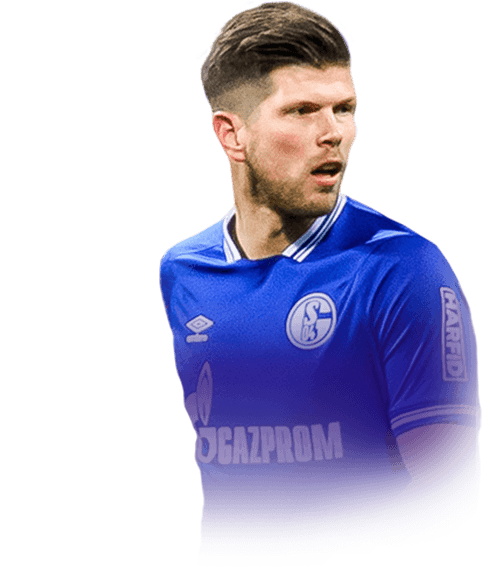 Yeah so basically for a while I've been looking for a player that can fill the void left by Robben's departure from my team. I have found him. He can be clunky at times but is fixed with an engine but I used marksman because I prefer just to get nutty finesse goals. As a striker he has good positioning makes amazing runs and if you don't really care about skill moves this card is a must. In terms of finishing in the box, out of the box, right foot, left foot just press that finesse shot and 95% of the time it will go in. In terms of work rate you can notice the medium/medium because the runs he make are nutty but can sometimes start running a bit late but I only noticed this once or twice in 7 games. And in terms of weak foot ill give you a guess. And the physicals lord have mercy he shrugs a majority of defenders off like a feather and he will win tackles and make great interception despite the low defending.

Everything about the shooting

Can be clucky at times

Passing can be unreliable at times

Okay. I know this review is quite early, and I have only played 10 games with this card. But I would rather give a generalized, slightly inaccurate opinion on this card, so you can decide on whether to complete it before the objective expires.

So take this review with a pinch of salt.

For reference I play him on 9 chem with an engine on him, and the squad attached is how I set up in game. I played all 10 games in Division Rivals., where I'm in Div 6.

Anyway, with the disclaimers and housekeeping out the way, this is my review of FUT Birthday Klaas-Jan Huntelaar.

He doesn't miss. And with 98 finishing as a base card stat: you'd hope not. Shooting is arguably this card's most important feature, other than the 5* Weak Foot. And speak of the weak foot; well, in short: he doesn't have one. I purposely made him take shots on it, and you can't tell the difference. 93 volleys aint bad either, but there is a small hole in this card: long shots. They aren't bad per se, but they are often saved by your average Alisson or Nick Pope. I have Player Moments Memphis Depay who handles the long shots, so I only tried a couple with Huntelaar. Overall, if you give Huntelaar the ball anywhere in the penalty area: well, just skip the celebration.

Okay, Klass aint no Neymar, but it gets the job done. The 3* skills obviously isn't ideal, but its not bad. He does feel slightly heavy on the ball. but provided you partner him with a more agile player (Rashford, Neymar, Mbappe, Ronaldo, Depay) it not that big of a deal. Nothing special in the dribbling department, but as I said: it gets the job done.

He's a bully. Even up against Varane, Gomez, Van Dijk: with ease. Many a time he's sent Klaiber, TAA or Ferland Mendy to the floor with a shrug of his shoulders. I'd say, without his strength. he'd be considered average and I'd only do him for the fodder. But as it stands, I think his strength and overall his physical stats are the second best, after his shooting of course.

You know what they say: Every silver lining has a cloud. He's just not fast enough. Well, to be fair, he's certainly not slow; but he will easily be outpaced by Varane, Gomez etc. However, if you don't force him onto the ends of through balls, and instead play him as a target man, pace shouldn't be an issue.

Klaas Jan Huntelaar is probably one of the best Strikers in the Bundesliga, except of Hwang Hee Chan, Halaand and Lewandowski TOTY. Probably you cant´t compare him to Meta Strikers like Rashford or Ronaldo. He isn't very moveable and not a dribbler.

I played him as a Striker in the 4231. And FOR ME he did what he had to. He was always on the perfect spot and made every shot really every shot. In Battles against Walker and Maldini he used his body and his good Sprint Speed. Sometimes he got overpaced but thats normal for a BOX 2 BOX Striker. He can Shoot from distance, use his head. has a good positining and win Sprint battles!

I would recommend you to do him, because it is an easy and makeable Challenge

I've only used him for one game (Division 5, scored a hat trick before halftime of a rage quit) but was so impressed I had to write this review. He is a wonderful addition to any Bundesliga squad. He is not the fastest but his shooting is deadly. The shot power reminds me of in-form Kent (from this year) or one card from last year (I can't remember which one but it was an objectives card, maybe Aspas???). The ball just comes flying off his foot. His AI runs are top notch and always end up leaving him in the right place. I was surprised by his physicality. On paper it looks pretty good but in-game it feels on another level. If you are even with a defender, he will more often than not bully the defender off the ball. Don't expect him to go bursting through like Mbappe or Davies. His play style reminds me a lot of any Haaland card in that he can be a little clunky for some but is an absolute unit when it comes to getting around people. I currently have a catalyst on him but will maybe try an engine to see what that feels like.

The only annoying thing was playing in at least 13 games. That seemed a bit much. The bottom line is, he will be a great addition to any Bundesliga or Dutch squad. I am very happy I completed him.

When I saw this card I was in love. As a Schalke fan, I would never have thought that we would get a special card after this mixed season. But there it is. The hunter. I've only used it in rivals and with the Chemistry Style Engine it is agile enough to act as a single striker, but also as a strike partner. With its Curveshot Traid and its 5 star weak foot, it is often the executor in the 0-30m range. He has a sensational start and a super sprint speed. Overall it's a very, very strong striker that I'll never replace.