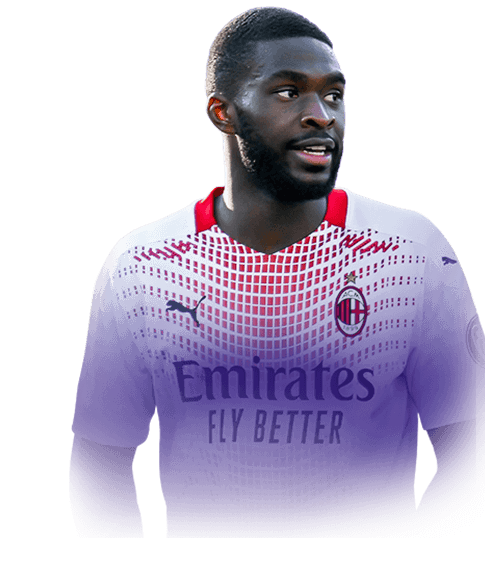 -
Sub out
Upcoming Matches
P. Chemistry
Squad chemistry
ST
67
RW
71
LW
71
CF
68
RF
68
LF
68
CAM
71
CM
74
RM
73
LM
73
CDM
83
CB
87
LB
85
LWB
83
RB
85
RWB
83
Reset
Basic
Sniper
Finisher
Deadeye
Marksman
Hawk
Artist
Architect
Powerhouse
Maestro
Engine
Sentinel
Guardian
Gladiator
Backbone
Anchor
Hunter
Catalyst
Shadow
Comments
Reviews
0
/600
Update my avatar Dos and don'ts
Top Rated
New
Controversial
Show comments
Top Reviews
Only logged in users can submit a review
A review must be written in English
At least 200 characters are required.
Compare this player to other similar players you have used(optional).
If you import your club to FUTBIN or send us an image with the player data(fill the form below) your review will be marked as verified.
Include what you liked about the player in the pros area and what you disliked about the player in the cons area.
Your review will be manually checked during the next 24 hours.
Chem Style Used
Formations
Position
Rate Player Base Stats (1-10)
Pace
5
Shooting
5
Passing
5
Dribbling
5
Defending
5
Physicality
5
Most Used In:
Submit Review

WOW! I packed this man out of the 81 plus player pick and he fits right into my team alongside Smalldini and Pope IF. Where shall we start? Pace was really good in the back. I outran so many players, but vs Mbappe he was a bit slower (which you would expect.) His defending was amazing. Auto blocked almost everything, and did very well in the box. In the box he was always in the right position at the right time. Physicality he was good but I just wish he was taller like Smalling. He did not win every header off of goal kicks and punts but did an amazing job. His 5 star skill moves was just wow and his weakfoot was really good. He could dribble really well just like Smalling, but his passing was on another level. I would recommend getting him definitely, and you cannot really expect his price to be lower as he is one of the fastest CB in the game. I would recommend pairing him up with Smalling in defense as it is OP.

His height could be a bit better for a CB.

I am an AC Milan fan, and look to buy my favorite players of the team and put them in my squad, Tomori was difficult because of his price, but since he is my favorite player from the current squad, so I sold my HL Upamecano and my neymar to buy Tomori, best decision ever, he feels smooth and confident in his area and his tackles are always clinical, obviously his pace is the principal stat, and believe me when I say that he outpaces every player on my rivals squad. And finally the 5* skills, wow, after he stops the rival's attack he orchestrates the counterattack by passing two or three players with skill moves.

Pace - he will outpace all attackers

Tackles - his tackles are clinical

Body type - He might be slim for a CB, although his bodytype helps him to be more agile