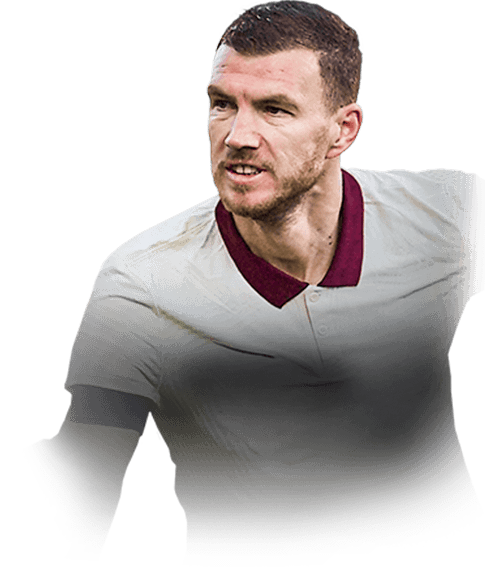 Just Played him in this squad. 5 FUT Champ Games and he just Scored 17 Goals, if u can handle the 3* skills just like me he's perfect cause of the 90 dribbling.

As a replacement for my TOTY Immobile he was just perfect, he was just even better than Immobile so if u run a squad with immobile def. get dzeko this bosnian cevapcici bomber is unbelievable.

Passing was a bit inconsistent

I have really enoyed tall, strong strikers this year. From my moments Kluivert to FB Hunterlar and Moments Ziroud, i played him at Right Striker with an engine on him. Wow was i impressed! The man can score anything you give him, he bullies defenders and goalkeepers! His finnesse shots where lethal and shots across keeper were like a dart, the man isnt slow either, with high acceleration he can burst through a defence with power. I have to say i will be supporting Roma this Thursday!

Interceptions (Fights for the badge)

I use Dzeko in a 4-4-2(2) formation as right striker next to headliner Mkhitaryan with a Hunter. I gotta say I am very suprised by Dzeko's card in game. He can score some absolute bangers when he gets in position and is fast and relatively agile too. Imagine his card with an upgrade. He be honest I am an Ajax fan, but it would benefit me on Fifa if Dzeko gets upgraded. Dzeko also scored some headers where you would lick your fingers off for (if the opposing GK is not coming out of the goal). His passing is a hit or miss, because sometimes he shoots the ball into nowhere. On the other side he almost always finds Mkhitaryan if Mkhi starts to run. His stamina is lacking after the 60th minute so be aware of that. It depends on how the game is. If the game goes fast then he lacks stamina, if you have the upper hand then not really. I do recommend a Hunter on his non upgraded card. If Roma wins or draws maybe an engine.

Balance (if the game is really fast paced)

3* Skills (Not really a problem for me)