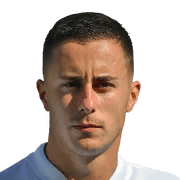 5
Sub out
Upcoming Matches
P. Chemistry
Squad chemistry
ST
79
RW
80
LW
80
CF
80
RF
80
LF
80
CAM
79
CM
79
RM
81
LM
81
CDM
79
CB
79
LB
81
LWB
81
RB
81
RWB
81
Reset
Basic
Sniper
Finisher
Deadeye
Marksman
Hawk
Artist
Architect
Powerhouse
Maestro
Engine
Sentinel
Guardian
Gladiator
Backbone
Anchor
Hunter
Catalyst
Shadow
Comments
Reviews
0
/600
Click here to verify your account in order to comment Update my avatar Dos and don'ts
Top Rated
New
Controversial
Show comments
Top Reviews
Only logged in users can submit a review
A review must be written in English
At least 200 characters are required.
Compare this player to other similar players you have used(optional).
If you import your club to FUTBIN or send us an image with the player data(fill the form below) your review will be marked as verified.
Include what you liked about the player in the pros area and what you disliked about the player in the cons area.
Your review will be manually checked during the next 24 hours.
Chem Style Used
Formations
Position
Rate Player Base Stats (1-10)
Pace
5
Shooting
5
Passing
5
Dribbling
5
Defending
5
Physicality
5
Most Used In:
Submit Review

So, like probably 90 percent of this community i was a little confused when i saw this card. First i saw some hungy people buy him for 200k, so when it dropped below 80k i decided to pick him up.

Well for me he is insane, he is quicker than the bots spamming popular meme pages on Instagram, he is faster than your local supermarket employee behind the cashier. I played againat this dude with mbappe neymar and neres up top, not a single time did any of those 3 break trough. He even tried playing " i want to break free - queen " on the background in the second half, but still he couldn't get trough. It wasn't for my van Dijk that caused that, it was actually this guy. His positioning is good. Some defenders on this game are lost like the children at the busy airports, but not this guy. If you know how to defend a little yourself, he is definitely worth trying.

Also i wanted to mention, because of his dribbling traits and stats he is amazing in building up from the back. Just pass it to him, and you can literally dribble away from the apponents strikers and leave the ball to someone else. He is smoother than Shakira's thighs on the ball. Its just amazing. You'll be able to do your apponents dirtier than the bathrooms at woodstock with this guy. You can pass it to him, make a run and shoot at goal, why not? I managed to score a goal like that with him in one of my first 5 matches. Ah yea my apponent did rage quit after that since his rooney couldn't get through either.

Ability to build up from the back

I didn't find any yet really

He isn't the strongest, but i haven't been bullied to the next game yet.

Marusic i a good palyer but very hard do use. Is very good for his low cost price and his speed as a CB. Is not automatic as Gomez and Varane and is not always precise in the contrasts. Is very usable in a fun team as a CB but also as a RB and LB. Very good for teams with a solid Serie-A but not a WL player. Is not agile and his passes are not very good. He has an average stamina, he isn't a game changer but he's very worth for his price like i sad before. Similar: base Gomez

I picked him red just to try him, i was thinking he was just a meme card but then i tried him i want to change my squad, one of the best def i have tried (i were using VVD 91 + Vidic Baby) absolute beast with shadow:

Dribbling (very good for a CB )

Physical (he will just move away all opponents)